If Chad Were to Fall, ISIL Could Threaten All of Central Africa 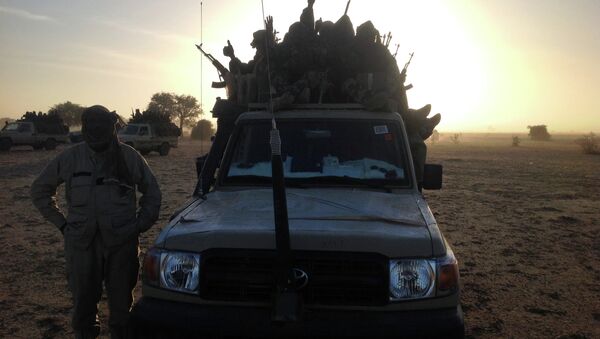 © AFP 2023 / ALI KAYA
Subscribe
International
India
Africa
Pushed back in Iraq and Syria, Daesh (ISIL/ISIS) has been attempting to establish a foothold in Libya. Speaking to Atlantico, French writer and geopolitical analyst Frederic Encel explained the threats facing the Central African country of Chad, and why it serves as a crucial foothold in preventing Daesh's spread south across the African continent.

World
Daesh Loses in Iraq, Syria Push Group to Expand to Africa, Pacific
Recently, professor Bakary Sembe of Senegal's Gaston Berger University warned that if the Chad 'protective barrier' were to fall, Daesh militants may quickly spread throughout the Sahel, the geographic zone between the Sahara Desert in northern Africa and Sub-Saharan Africa to the south.

Asked by Alantico whether Sembe's fears are justified, and what role Chad, a landlocked country bordering Libya to its north, might play, Encel suggested that ultimately, a great deal will depend on the Chadian leadership's ability to preserve political stability in the run up to next month's presidential elections.

Map of the Central African country of Chad.
© Photo : Wikipedia

Africa
Just In Case: Inside the Pentagon’s Explosive Plan B for Libya
Indeed, Encel noted, "Chad is opposed to radical Islamism, in so much as it is a threat to its sovereignty. Thus, the Chadian army was involved in military operations against the Nigerian terrorist movement Boko Haram," which pledged its allegiance to Daesh last year.

"But things get complicated when talking about Libyan Islamists, because the border is not directly threatened…Moreover, during the crisis in the Central African Republic in 2013, Chadian President Idriss Deby looked at the conflict through a religious and ethnic lens, and attempted to present himself as a defender of the Muslim population in the neighboring country."

"With regard to the barbarians from Daesh, thousands of whom are now digging in in Libya, it's too early to see whether Chad is conducting the fight [against them] decisively and effectively," the analyst added.

"In any case," Encel suggested, "even if there is a change of power after the April elections [to be held April 10], it is unlikely that Daesh will be able to gain a foothold in the country: the Chadian people have traditional views on faith, and, like other peoples in the Sahel, are not Arabs, and are wary of politicized Islam. Therefore, they would not welcome these fanatics with open arms, who by the way, now occupy only a portion of the northern coast of Libya, far from the arid border between Libya and Chad."

With Chad currently facing a measure of political instability, including waves of anti-government protests, Atlantico asked the expert whether this is something Islamist terrorists might attempt to take advantage of.

"As in other African countries, the fact that one person or clan stays in power for many years is [naturally] something that causes discontent among the population…Idriss Deby took office more than two and a half decades ago [in 1990]. His economic record, incidentally, is not so bad, but against the background of growing democratic demands among the population, this is not enough. Moreover, poverty is still very high, while corruption and cronyism have become an obstacle for potential investments and undermined public confidence."

"Overall," Encel noted, "the president (who has a powerful military tool at his disposal) is more concerned about internal processes, than external shocks, whether from Sudan or Nigeria."

Satellite Images Confirm: French Special Forces Deployed to Libya
Ultimately, he does not believe that Daesh poses any real threat to Chad, so long as a measure of political stability is maintained. "The country's army is effective, disciplined, and well-armed; it was trained by French officers under bilateral agreements in the 1970s and 1980s."

However, he warned, "if the country were to be destabilized, as it was during the coups and civil wars of that period, France would be forced to act, first of all, because we already have troops and equipment there, and secondly, because Paris has pledged to fight radical Islam in the Sahel. It was possible to save Mali from Islamist gangs in January 2013, while the situation in neighboring Niger remains very unstable."

"From this perspective, it would of course be preferable to see a smooth democratic transition in Chad," Encel concluded.