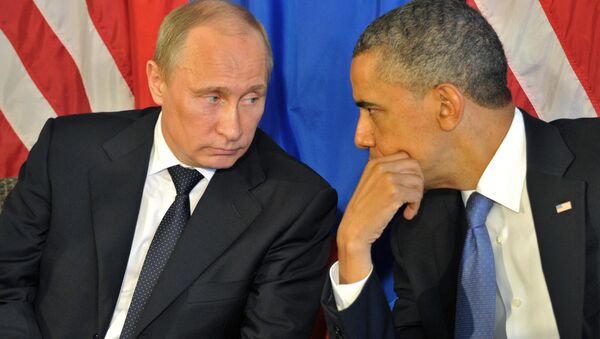 Former US Defense Secretary William Perry spoke to Sputnik in an interview about the deterioration of relations between the US and Russia and whether further cooperation is possible.

Speaking at the Guardian Live event in London, Mr. Perry said although it was Vladimir Putin’s decisions on Ukraine and Syria which soured the ties between the two countries in recent years, the White House played a big role in the deterioration of relations after the demise of the Soviet Union.

In particular it was the US’ neglectful attitude towards Moscow’s security concerns – NATO’s expansion to the east and the US’ plans to deploy its missile defense system in Europe.

William Perry, who served in the Clinton Administration from 1994-1997, opposed the North Atlantic Alliance’s fast expansion, saying it would alienate the Kremlin.

Radio Sputnik linked up with the former US Secretary of Defense to find out more about Russian-US relations.

“It was initially a very cooperative relationship between Russian and the United States. The peak of that perhaps was 20 years ago in 1996 when Russian and the US troops served together in Bosnia in unified command. We often had joined peace keeping exercises together sometimes in the US and sometimes in Russia so it all started off with a very positive and cooperative relationship,” William Perry told Sputnik.

Russia to Respond Adequately to New US Nuclear Bombs in Europe
Another factor which contributed to the cooling of relations between Washington and Moscow is the US support for pro-democracy demonstrators in the color revolutions in the former Soviet republics.

“In the last twenty years that association has gone quite sour and today it is dangerously past our relationship which is very important to try and correct,” he said.

Talking about how much the relationship has deteriorated between the two countries; William Perry said that the relationship is the consequence of a set of events that have occurred over the last twenty years.

“The relationship today is the consequences of a set of actions that occurred in the first ten years in that twenty year period. I put most of the blame on the US. The second problem occurred during the last ten years where I tend to put most of the blame on Russia, so there is plenty of blame to go around but both the US and Russia have acted poorly and as a result today we have a dysfunctional relationship between our two countries. I think that is bad and dangerous not just for us but for the whole world.”

The former US Defense Secretary further spoke about why is it dangerous for the two countries if the tensions prevail.

Talking about how the situation can be saved from further deterioration, Perry said, “I think that the two leaders should engage in a dialogue with a specific purpose to improve relationships between the two countries. I think it’s very important that our two presidents meet and talk.”

Perry discussed how he has advised the US president to meet with the Russian president and how he would see that open dialogue from the highest level improve the relations.