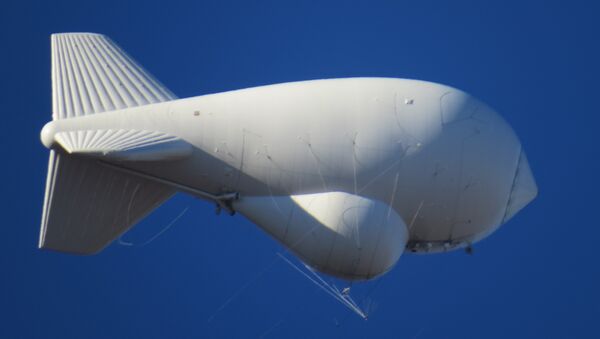 © Flickr / Jack and Petra Clayton
Subscribe
International
India
Africa
When a runaway surveillance blimp deflated and crashed over a Pennsylvania suburb last October, it left a significant gap in the Pentagon’s JLENS program. Now the US Army is seeking a sizeable budget increase to build a replacement, hopefully with stronger mooring cables.

When one of those blimps slipped its moorings and ran amok in October 2015,  two F-16 fighter jets ran in pursuit, and the Pentagon watched helplessly as half of its $2.7 billion program crashed.

Now the US Army wants another $27.2 million to replace the ill-fated spy balloon.

It remains unclear if the US Congress will grant their wish. JLENS funding was reduced for fiscal year 2016 after the October 2015 fiasco, and the program faced heavy criticism long before that incident, with few officials confident that the excessive price tag was justified.

Last month, tests carried out by the US Army proved that the blimps are not entirely effective in tracking airborne objects. The report blamed faulty software that “could result in some high priority radar targets not being processed and tracked,” adding that the radar is unable to identify friendly aircraft from hostile.

There are also questions over blimp safety. While the October 2015 crash ended without any casualties, a similar incident in Kabul, Afghanistan, left five people dead after a balloon mooring cable was severed by a helicopter rotor.

Throughout 2013, at least three Army blimps broke free in Afghanistan.

According to the budget request submitted to Congress, the money would go toward "the required corrections." $4 million would be used to repair the damaged balloon, while another $2.2 million would fund training and preparedness "to prevent a similar incident."

The remaining $21 million would be used to continue the JLENS trial period.

While it may seem like a no-brainer to reject the request, and instead, scrap the impractical program altogether, JLENS has survived, in part due to outside interests.

"The JLENS workers will be buying homes, shopping in our grocery stores and eating in our restaurants," Maryland Representative Dutch Ruppersberger wrote, in a press release soon after it was announced that his district would host one of the blimps.

Raytheon, the defense contractor that builds the balloons, has an extensive lobbying presence in Washington. Through its political action committee and employee contributions, Raytheon has donated $1.6 million to the very politicians who decide on Army budget requests.