Playing Dress-Up in Syria: How the West Tries to Save Its Terrorist Hordes 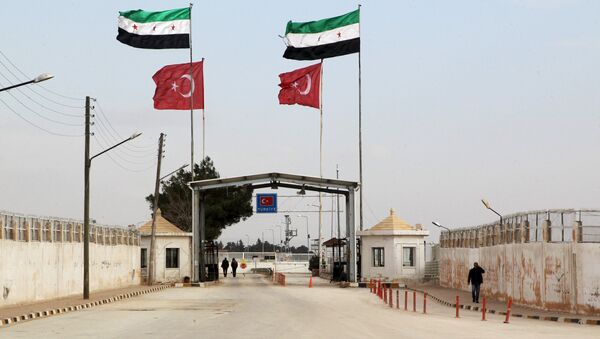 The US-led coalition operating in Syria is playing a massive game of dress-up in the country, where “its immense but now stranded terrorist hordes” change their banners back and forth from Daesh to the so-called Free Syrian Army, seeking protection within the terms of the ceasefire, according to a Bangkok-based geopolitical researcher.

US-backed Proxies Use Ceasefire in Syria to 'Regroup, Rearm and Prepare'
The Syrian conflict portrayed by the US-led coalition as a civil war within the country is in fact a clear invasion from outside Tony Cartalucci writes in his article for the New Eastern Outlook website.

The world has realized that there has never been a so-called Free Syrian Army (FSA) operating on Syrian soil. The fighters were actually western-backed “terrorist hordes,” flowing into the country as one would expect amid an invasion, not a “civil war,” he says.

“While the West’s military campaigns over and upon Syrian soil claimed to be taking on the so-called “Islamic State” (ISIS) or Daesh, it was clear that nothing was being done about cutting off the obvious supply corridors sustaining Daesh's ability to fight.

“In other words, the US and its “coalition’s” war on ISIS was feigned. No genuine military campaign would ever be fought on the front lines while neglecting the enemy’s logistical lifelines – especially when those lifelines led from NATO territory,” he states.

US State Department Says Working ‘Constructively’ With Russia on Syria
It wasn’t until Russia’s intervention on behalf of the Syrian government, he adds, when these corridors were targeted and disrupted – thus fully exposing the gambit for all the world to see.

“Not surprisingly, as soon as this began, it had an immediate effect on the West’s proxy forces across the country. Since then, Russian-backed Syrian forces have incrementally begun sealing off Syria’s borders, isolating stranded terrorist factions within the interior of the country, and retaking territory as these forces atrophy and dissipate.”

As the global public becomes increasingly aware of this “glaring point of logic,” the researcher explains, “it appears that the West is now attempting to cynically leverage it, while simultaneously rescuing thousands of trapped terrorist mercenaries facing encirclement and destruction in the closing phases of the Syrian conflict.

The author provides as an example a sudden appearance of the “New Syrian Army,” a moniker for the discredited FSA, on the Iraqi-Syrian border, “cutting off” ISIS supply lines leading back and forth between the two countries.

Syrian Kurds Urge US, Russia to Force Free Syrian Army to Peace
He further questions why such border interdiction operations haven’t been done before, and in fact, why these “rebels” who are admittedly harbored, trained, funded, and armed in Jordan and Turkey to begin with, didn’t first begin by securing Syria’s borders to prevent Daesh from entering the country in precisely the same areas “rebels” are supposedly operating?

His answer is very simple: the West had no intention of stopping Daesh.

“In fact, Daesh are the “rebels” and the “rebels” are Daesh. Their “taking” of the Syrian-Iraqi border is superficial at best. The weapons, cash, and fighters will still flow, just as they do past NATO forces along the Turkish-Syrian border. The only difference is that now these terrorists will be flying the “FSA” flag, lending them protection amid a ceasefire agreed to in good faith by the Syrian government and its allies.”

Taking full advantage of the ceasefire, the “FSA” is now suddenly appearing as if rising from the dead, everywhere Daesh and Al Qaeda have dominated for years, he says.

“It appears that – having exhausted all other options – the West has decided to change as many of those black banners back to the “rebel” green, white, and black (the colors of the Free Syrian Army) as possible, before the conflict draws to a close, giving the West the most favorable position achievable ahead of “peace talks.”

During early victories against the West’s proxy forces, Al Qaeda and Daesh militants would dress as women to flee the battlefield. Now, they are dressing up as the otherwise nonexistent “FSA,” the author concludes.