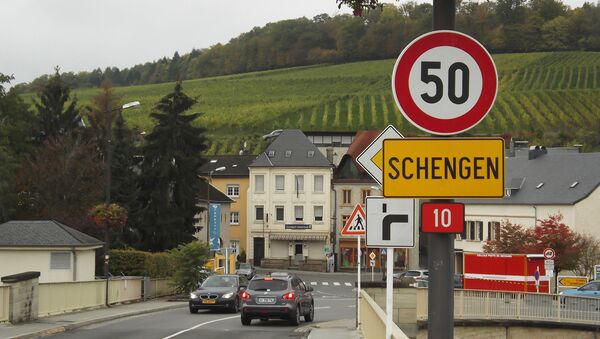 © Flickr / Attila Németh
Subscribe
The expenses will be concentrated in certain regions, but will inevitably have an impact on the entire EU economy, according to the European Commission.

BRUSSELS (Sputnik) – The full restoration of border controls within the Schengen area will entail annual financial losses up to 18 billion euros ($19.7 billion) for the countries of the passport-free zone, the European Commission (EC) said Friday.

"Temporary border controls not only hamper the free movement of persons, they also come with significant economic costs. The Commission has estimated that a full re-establishment of border controls within the Schengen area would generate immediate direct costs of between €5 and €18 billion annually (or 0.05%-0.13% of GDP)," the EU body said in a roadmap aimed at returning to the normal functioning of the 26-member free movement zone.

The expenses will be concentrated in certain regions, but will inevitably have an impact on the entire EU economy, the commission stressed.

Doom and Gloom: EU to Lose 1.4 Trillion Euros If Schengen Collapses
In particular, Poland, the Netherlands or Germany would face over 500 million euros of additional costs for the road transport of traded goods, while Spain or the Czech Republic would see their businesses paying over 200 million euros in additional costs, the European Commission explained.

A number of European states, including Austria and Germany, have recently suspended the Schengen Agreement and toughened their border checks, introducing special procedures on their borders. The measures aim to curb the influx of refugees.

Finger Pointing: EU Makes Greece 'Scapegoat' Over Refugee Crisis
"The creation of the Schengen area without internal borders has brought important benefits to European citizens and business alike, yet in recent months the system has been severely tested by the refugee crisis. The European Council of 18-19 February set the clear mandate of restoring the normal functioning of the Schengen area, and to do so in a concerted manner, while giving full support to Member States facing difficult circumstances," the statement read.

The roadmap stipulates flexible approach to regulation of border controls within the Schengen Area, securing the EU external borders, immediate support for Greece and stopping the "wave-through" approach to those who indicate an interest in applying for asylum.

"The objective would be to lift all internal border controls by December, so that there can be a return to a normally functioning Schengen area by the end of 2016," the commission outlined.

Since September 2015, eight countries in the Schengen zone have reintroduced border checks.