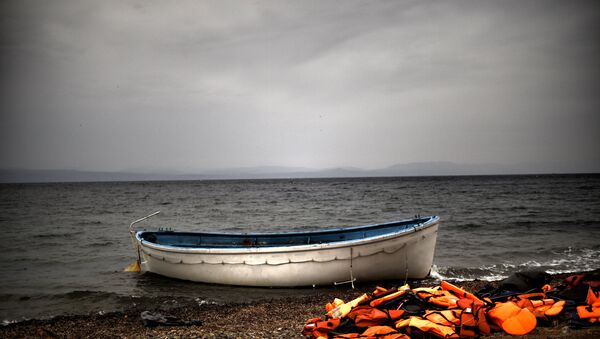 As the European Union (EU) is miserably failing at finding solutions to effectively deal with the ongoing refugee crisis, it has made Greece a scapegoat, blaming it for the influx of migrants, according to US-based geopolitical intelligence firm Stratfor.

At the end of 2015, the EU agreed to cooperate with Turkey attempting to limit the number of refugees coming to the continent. But this strategy has failed, Stratfor said.

"And they [EU members] appear to have reached an agreement on who is to blame: Greece," the Stratfor report said.

A number of EU members threatened to expel Greece from the Schengen Agreement, citing the Greek government's unwillingness to patrol its border with Turkey, thus allowing refugees to enter Europe.

The European Commission went so far as to issue a statement that Greece is "seriously neglecting its obligations" and its government has "serious deficiencies in the carrying out of external border controls."

EU Kicks Greece in Political Desperation Over Refugee Crisis
Having said that Brussels ordered the Greek government to improve its border controls within the next three months, otherwise Greece would be at risk of being kicked out of the Schengen area.

If Greece were to be ousted from the passport-free zone, it would affect Greek citizens traveling within the EU — they would be treated like third-world nationals, the US intelligence company said.

The EU is using the threat of expulsion as a political tool aimed at putting pressure on the Greek government to tighten the country's border with Turkey.

The problem with punishing Greece by expelling it from the Schengen area is that the country doesn't share any land borders with other Schengen members. This means refugees wouldn't be affected by the move [but Greek citizens would], because they would continue to march on, pass through the non-Schengen Balkan states and then re-enter the EU again in Hungary, Stratfor said.

EU members have been looking for ways to isolate Greece from the rest of the union by strengthening the border between Macedonia and Greece, with EU members putting extra border guards and equipment on the Macedonian border.

It would be a weird and complicated political move, because if the EU was to fortify the Macedonian border it would be "helping a non-member state [Macedonia] while harming one of its own [Greece]," Stratfor said.