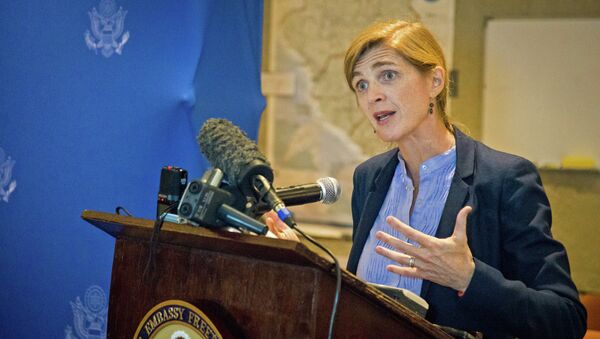 US Ambassador to the United Nations Samantha Power said that the United States has circulated a draft UNSC resolution to expand sanctions against North Korea over its nuclear activities.

UNITED NATIONS (Sputnik) – The United States has circulated a draft UN Security Council (UNSC) resolution to expand sanctions against North Korea over its nuclear activities, bringing the restrictive measures against Pyongyang to an unprecedented level, US Ambassador to the United Nations Samantha Power said.

"Today in response to the DPRK’s recent nuclear tests and subsequent proscribed ballistic missile launch, the United States tabled a draft UNSC resolution that if adopted will break new ground and represent the strongest set of sanctions imposed by the SC in more than 2 decades," Power said on Thursday.

The sanctions would target North Korean banks and assets and would limit or ban exports of coal, iron, gold, titanium and rare earth minerals from the country, as well as prohibit the supply of aviation fuel, specifically rocket fuel, to North Korea.

Apart from financial and sectoral sanctions, the draft resolution stipulates, among other things, that conventional weapons sales to North Korea would be prohibited, that all cargo going in and out of the country would be inspected.

"These measures would also ground DPRK flights suspected of carrying contraband, suspicious vessels carrying illicit items would be denied access to ports. These sanctions if adopted, would send an unambiguous and unyielding message to the DPRK regime. The world will not accept your proliferation…and we will work relentlessly and collectively to stop your nuclear program," Power said.

US Demands for N. Korea to Abandon Nuclear Program 'Extremely Hypocritical'
China’s UN Ambassador Liu Jieyi supported the draft, expressing hope that it would help achieve the denuclearization of the Korean peninsula. China and the United States reportedly agreed to the draft resolution on Wednesday.

Both US Ambassador to the United Nations Samantha Power and Japan’s Permanent Representative to the UN Motohide Yoshikawa stressed on Thursday that the resolution does not aim to punish the North Korean people but targets the country's leadership.

According to Russia’s Deputy Permanent Representative to the United Nations Petr Iliichev, the UN Security Council will vote on the draft resolution next week.

Iliichev said on Thursday that Russia "needs more time" to review the draft.

Russia, as well as China, the United States, the United Kingdom and France, can veto any resolution as permanent members of the UN Security Council.

Following North Korea's alleged nuclear test in January, the UN Security Council announced plans for further measures against Pyongyang to be outlined in a new resolution. In mid-January, China announced its support for such efforts.