Bolshoi Theatre Playing Role of Russia’s ‘Cultural Ambassador’ to US 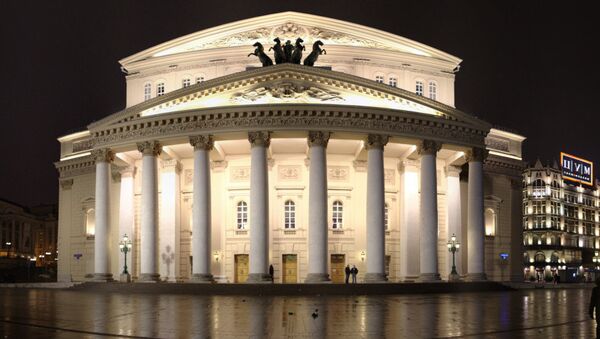 Bolshoi Theater is playing the role of a “cultural ambassador” of Russia to the United States, promoting friendly relations between the two countries under the conditions of sanctions, Bolshoi’s Press Secretary Katerina Novikova told Sputnik.

WASHINGTON (Sputnik), Anastasia Levchenko — Bolshoi is now implementing its initiative called Innovative Performance in HD. Theater shows screenings of remarkable ballets and operas on big screens in museums and universities in a number of US cities. Most of the time, it is free of charge.

“The cultural field always tries to be united worldwide despite sanctions. In mid-1950s, Bolshoi was travelling abroad, showing that the Soviet Union has a human face. Nowadays Bolshoi continues to play this role of a cultural ambassador,” Novikova said.

The idea of screening performances and showing them worldwide appeared several years ago and was implemented due to Bolshoi’s collaboration with Bel Air Media.

Russia Seeks to Expand Bolshoi-Washington National Opera Exchange Program
“Bel Air Media is the only company which records Bolshoi ballets and operas. They are basically our only partners in terms of producing video content. Our constant partner in cinema screening is Pathe,” Novikova stated.

The project came to the United States when Bolshoi received a proposal from Anna Winestein, the director of Ballets Russes Arts Initiative, a non-profit that fosters international creative exchange in the visual and performing arts.

“I think it is a good idea to show our productions here, in the United States, and especially to talk about it. Also, because in cinemas we can show only ballets, and not operas. And here we are showing [operas] Wozzeck and Eugene Onegin,” Novikova noted.

She added that it gives a chance to make the American audience familiar with those performances (operas in particular) that have never been presented in the United States, such as Eugene Onegin opera staged by Dmitri Tcherniakov.

“First two days in Washington, DC have been quite successful, as we had around 350 people. There was not much publicity about it, and still they came,” Novikova said.

On February 20 and 21, Bolshoi showed American viewers “The Flames of Paris” ballet and “Wozzeck” and “Eugene Onegin” operas.

After Washington, DC, Bolshoi screening will go to New York and Boston. The project in the United States will last until March 20.