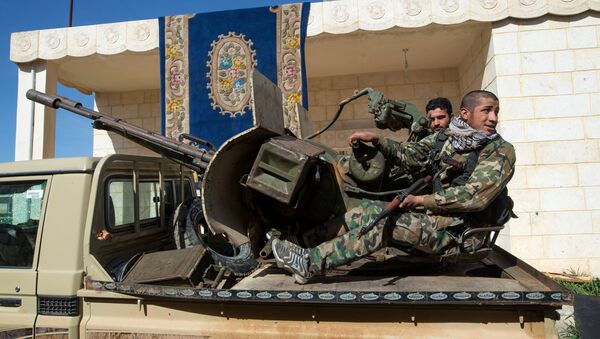 © Sputnik / Ilya Pitalev
/
Go to the photo bank
Subscribe
The Syrian Army and its popular allies have launched a major operation to dislodge militant groups from the surroundings of the government forces’ main supply line from Hama to Aleppo, Iran’s Fars news agency reported.

"The Syrian army troops and the National Defense Forces, who captured a number of checkpoints along the Ithriya-Khanaser road, have launched a massive joint operation in both provinces of Hama and Aleppo to end ISIL [Daesh] and Jund al-Aqsa's control over chunks of the strategic road," the army said, Fars News wrote.

Aleppo Advance: How to Defeat Daesh and Avoid New World War
Earlier on Tuesday the army announced that government forces had recaptured several checkpoints in the region.

"The Syrian government forces have continued to hit the lines of defense of ISIL [Daesh] and Jund al-Aqsa terrorist groups along the Ithriya-Khanaser road at Rasm al-Nafal and al-Syria Tel region towards al-Sa'an," the army said in a statement.

It added that despite recapturing a number of checkpoints along the Ithriyah-Khanasser road, the Syrian army had failed to retake a number of strategic villages under Daesh control and reopen the supply route.

The YPG and SDF fighters, backed by Syrian warplanes and artillery, pushed the Free Syrian Army (FSA) back from a complex of houses in several neighborhoods and inflicted a heavy death toll on the enemy.

Also on Tuesday, the Turkish artillery shelled the Kurdish strongholds in the newly-liberated town of Tal Rifaat and the strategic Minaq airbase in the northern part of Aleppo to prevent rapid advances of pro-government forces against Ankara-backed militants.