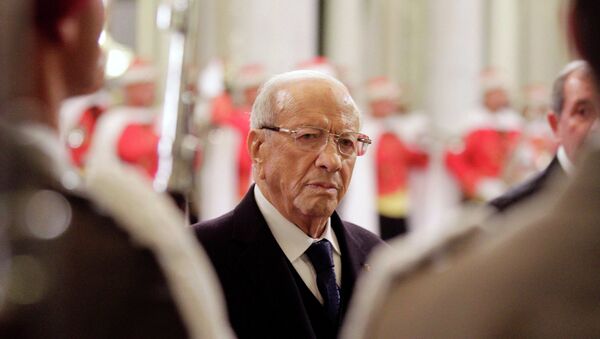 Tunisian President Beji Caid Essebsi decided once again to declare a state of emergency for a month, starting from February 22, 2016, according to official statement.

Tunisia Rules Out Participation in Military Campaigns Abroad
MOSCOW (Sputnik) — Tunisian President Beji Caid Essebsi on Sunday extended for another month a state of emergency in the country.

In November, a bomb hit a bus carrying elite presidential guards in Tunisia’s capital city Tunis, killing 13 and injuring 20. Following the attack, Essebsi declared a state of emergency, saying that the country was at war against terrorism. Late December, the state of emergency was extended for another two months.

"After consulting with the prime minister and the speaker of the parliament on security issues, the situation at the borders and in the region as a whole, the president of the republic has decided once again to declare a state of emergency for a month, starting from February 22, 2016," the statement on the Tunisian presidency Facebook page reads.

Tunisian Security Forces Uncover Terrorist Cell With Plans on Attacks
Tunisia has been a target for terrorists, including the notorious Islamic State (ISIL or Daesh) extremist group, which is outlawed in many countries including Russia.

On March 18, a group of gunmen dressed in military uniforms opened fire on tourists at the National Bardo Museum near the parliament building in Tunis, killing 22 and injuring more than 47, mostly tourists. The Daesh claimed responsibility for the attack.

The Daesh radicals have carried out another attack in the country in August, killing 38 holidaymakers on a beach in the town of Sousse.