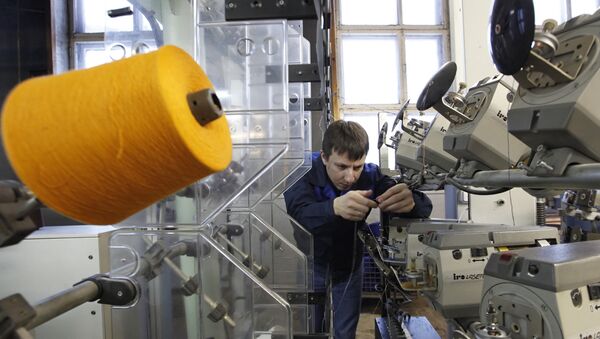 The process of industrialization in Russia opens broad prospects for the Italian companies, which are ready to invest in the country's business and create joint ventures with Russian enterprises, Italy's ambassador said.

MOSCOW (Sputnik) – The economic cooperation between Moscow and Rome will augment within the next few years as the Italian business still believes in the Russian market, Italian Ambassador to Russia Cesare Maria Ragaglini said.

"I am absolutely convinced that in the near future, in the coming years, cooperation will grow. Our economies are naturally complementing each other. Difficulties still exist, but Italian companies continue to believe in the Russian market," Ragaglini told RIA Novosti in an interview.

In recent months, deals on direct investments, joint ventures and a relatively large number of contracts on supply of goods and materials were clinched, the ambassador explained.

"It is clear that the drop in oil prices has complicated the economic situation in the country. All this prompted the Russian government to reconsider the economic strategy, including the scheme of building relationships with foreign partners, in order to gradually turn the country into a producer of goods and materials," he noted.

The process of industrialization in Russia, first and foremost, in the light industry, opens fairly broad prospects for the Italian companies, which are ready to invest in the country's business and create joint ventures with the Russian enterprises, the diplomat stated.

The Embassy of Italy has prepared a document, which includes attractive investment rating of the Russian regions to give impetus to bilateral economic relations, he outlined.

Italy will be the first guest country in the history of the St. Petersburg International Economic Forum (SPIEF) in 2016, the Italian ambassador to Russia said, adding he did not exclude an appearance by Prime Minister Matteo Renzi at the event.

The 5 Most Important Geopolitical Highlights of SPIEF-2015
The annual SPIEF forum is scheduled to take place on June 16-18 in St. Petersburg, Russia. Italy will have its own pavilion – Casa Italia – where it will showcase its leading industries.

Cesare Maria Ragaglini said that the progress being made in Russian-Italian economic relations would be evidenced by Italy’s unique position at SPIEF 2016.

"Political representation will be of the highest level, including a delegation of entrepreneurs," Ragaglini said.

Asked if the event was likely to attract Italian Prime Minister Matteo Renzi, the diplomat replied that, "I must say, we are not ruling anything out."

The economic forum has been held every summer for the past 18 years under the auspices of Russian President Vladimir Putin.