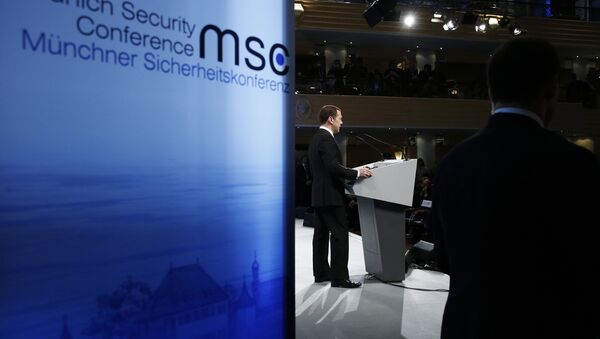 Finian Cunningham
All materials
Can we please just dispense with the nonsense and talk about how things really are. The US-led NATO military alliance is at war with the world. And Russia is the main force holding this criminal organization at bay.

Listening to various Western political leaders at the recent Munich Security Conference is both laughable and cringe-making. We heard from the likes of US top diplomat John Kerry and British foreign secretary Philip Hammond holding forth on issues of international law and peace, while NATO’s Jens Stoltenberg and General Philip Breedlove assured that there was no Cold War.

The EU’s foreign affairs chief Federica Morgherini also made the stupendous denial that the world was not witnessing a new Cold War towards Russia, as did German foreign minister Frank-Walter Steinmeier.

German FM: 'Cold War Rhetoric’ Oversimplifies Global Situation
Who do these people think we are? If they are stupid enough to live in denial that’s up to them. But surely the rest of the thinking human race can see the world for what it is: a place where the United States and its various allies are running amok, making a mockery of international law, waging wars, covertly and overtly, against anyone who stands in their way.

This is exactly the sordid scenario that Russian president Vladimir Putin warned about back in 2007 when he addressed the Munich conference. Putin said it would end in tears, from lawlessness and state-sponsored terrorism, instigated and justified by Western leaders who hypocritically speak as if they are paragons of virtue.

Solid & Active: How Russian Policy Has Changed Since Putin’s Munich Speech
It truly is sickening to be lectured by Western warmongers and their apologists. Russia’s prime minister Dmitry Medvedev and foreign minister Sergei Lavrov were probably the only sane voices at the Munich conference this year. Both reiterated the danger to world peace from NATO’s warmongering – and yet both were scoffed at by their Western counterparts for speaking the truth.

In Syria, let’s cut to the chase. The alleged pro-democracy uprising that the Western media have been spinning for the last five years is this: it’s a covert war of aggression on a sovereign country for regime change. NATO powers and their regional client regimes have weaponized the proxy assault forces who are comprised of myriad terrorist mercenaries.

That is standard operating procedure for the United States and its NATO allies, when outright conventional military attack on countries is politically unpalatable.

NATO member Turkey is now openly firing into Syrian territory. How’s that for the organization that claims to maintain global security?

We should not even dignify Ankara’s claims for its violation of international law. The fact is that it is attacking a neighboring country with artillery barrages. This is simply aggression, as the Syrian government has protested this week to the United Nations Security Council.

The irony of Turkey violating Syria’s sovereignty at the very same time that NATO leaders were pontificating in Munich about “security” is too much for words.

Damascus Urges UN to Intervene in 'Turkish Aggression on Syrian Territory'
The irony of the US and Britain lecturing Russia over its legal military intervention in Syria to defend a state from NATO-backed subversion using terrorists is sickening. Doubly sickening considering that Washington and London have been actively assisting in the Saudi bombing of Yemen for the past year during which every possible civilian center, including hospitals, schools, family homes and markets have been struck with horrendous death toll.

NATO member Turkey and the US-British client regime Saudi Arabia are threatening to send military ground forces into Syria. That threatened invasion – itself an act of aggression – is to salvage the Western-backed war for regime change in Syria, which Russia’s five-month-old intervention is brilliantly thwarting.

Western media – the brainwashing system that it is – will of course tell lies and distort, reducing the bigger picture to the nonsensical fragment of daily events, which are, in turn, riven with fabrications and omissions. Like the US military spokesman Colonel Steve Warren’s claim last week that Russian warplanes bombed two hospitals in Syria’s northern city of Aleppo. Russia clarified that claim by saying it had no warplanes in the city, and that it was in fact two US aircraft that carried out bombing raids.

Let’s not even go there: the claim, counterclaim and endless minutiae.

That is only letting other people dictate the narrative to suit their ends.

The fact is Syria has been brought to near-destruction by a US-led covert war that was long in the making before the official eruption of violence in mid-March 2011. The war was prosecuted with terrorist proxies who are now being destroyed by Russian air power in combination with Syrian army and Iranian and Hezbollah ground forces.

'Dreams Turned Into Nightmares': Arab Spring Wrecked Middle East
None of this should be surprising. The US and Britain destroyed Iraq and Afghanistan with over a million dead. The US and its NATO allies destroyed Libya.

The US and its European partners tried to destroy Ukraine with a regime change operation that installed a Neo-Nazi coup in February 2014, which then proceeded to wage a war on the people of eastern Ukraine, simply because the latter refused to recognize the impostor-junta that the West orchestrated.

The historical consistency is that NATO was formed in 1949 to wage war on the Soviet Union – the real victor of the Second World War against fascism in Europe. The powers behind the rise of Nazi Germany and European fascism were the Americans and the British in an attempt to keep the world safe for capitalism. NATO just took up where Nazi Germany failed.

Why, after the Cold War officially ended 25 years ago, does this execrable NATO outfit still exist? Why is it relentlessly militarizing Europe and making hysterical warmongering claims against Russia?

Russian premier Medvedev is right. There is a Cold War afoot. Even though others at Munich pathetically deny the reality. The truth is that the Cold War never actually ended. It has just been extended.

Russia-NATO Relations Reach Level of New Cold War - Medvedev
NATO’s covert war in Syria is now an open war with the organization’s Turkey doing the shelling. Oh yeah, Washington may be telling Ankara to tone down the aggression, simply because it is a public relations fiasco. But don’t let that deceive. Turkey and Saudi Arabia are just acting out the very same aggression that Washington and its British and French partners-in-crime have been doing for the past five years.

Let’s just say it. NATO is a warmongering machine that promotes Western hegemony in the world. It has got nothing to do with security unless you mean security for US-led capitalism. It craves a unipolar world of dominance where all countries must prostrate themselves before the masters.NATO is merely the official club formed by the Western capitalist powers to give themselves a veneer of legality and morality.

Russia is the prime target in NATO’s wider war to subjugate the planet. US planners said so in the early 1990s when they candidly urged that the US and its European vassals should not tolerate any opposition to capitalist world domination by the financial oligarchy based in Wall Street and its various European offshoots.

NATO’s war against Russia – not quite fully-fledged yet in open warfare – is really this: NATO is at war with the rest of the world.
Everyone, including ordinary American and Europeans, is in its firing line.

000000
Popular comments
Excellent article sir. Thank you. Wish India (my country) and China would come out in support of Russia. The only true and braveheart country in the world today. God Bless Russia and save Syria.
randhirs99
16 February 2016, 13:46 GMT8
000000
The broad sweep of the author's understanding perfectly encapsulates NATO - and the spineless EU - as a tool of US megolamania. What's amazing to the initiated - meaning those who have made the effort to find the truth for themselves - is how many still fall for the tripe that passes as mainstream media.
dimce
16 February 2016, 13:38 GMT6
000000
Newsfeed
0
New firstOld first
loader
LIVE
Заголовок открываемого материала
Access to the chat has been blocked for violating the rules . You will be able to participate again through:∞. If you do not agree with the blocking, please use the feedback form
The discussion is closed. You can participate in the discussion within 24 hours after the publication of the article.
To participate in the discussion
log in or register
loader
Chats
Заголовок открываемого материала
Worldwide
InternationalEnglishEnglishMundoEspañolSpanish
Europe
DeutschlandDeutschGermanFranceFrançaisFrenchΕλλάδαΕλληνικάGreekItaliaItalianoItalianČeská republikaČeštinaCzechPolskaPolskiPolishСрбиjаСрпскиSerbianLatvijaLatviešuLatvianLietuvaLietuviųLithuanianMoldovaMoldoveneascăMoldavianБеларусьБеларускiBelarusian
Transcaucasia
ԱրմենիաՀայերենArmenianАҧсныАҧсышәалаAbkhazХуссар ИрыстонИронауОssetianსაქართველოქართულიGeorgianAzərbaycanАzərbaycancaAzerbaijani
Middle East
Sputnik عربيArabicArabicTürkiyeTürkçeTurkishSputnik ایرانPersianPersianSputnik افغانستانDariDari
Central Asia
ҚазақстанҚазақ тіліKazakhКыргызстанКыргызчаKyrgyzOʻzbekistonЎзбекчаUzbekТоҷикистонТоҷикӣTajik
East & Southeast Asia
Việt NamTiếng ViệtVietnamese日本日本語Japanese俄罗斯卫星通讯社中文（简体）Chinese (simplified)俄罗斯卫星通讯社中文（繁体）Chinese (traditional)
South America
BrasilPortuguêsPortuguese
NewsfeedBreaking
03:51 GMTChina May Direct Its Nuclear Missiles Towards Australia as AUKUS 'Serves US’ Demands' - Report
03:47 GMTFive People Injured, 49 Flights Canceled in Japan Over Typhoon Chanthu – Reports
03:41 GMTResearchers Find Part of Universe's Missing 'Ordinary' Matter
03:27 GMTVenezuelan Government Says Banco de Venezuela Faced 'Terrorist Attack'
02:16 GMTGerman Politicians Slam University Guidelines to Implement ‘Gender-Neutral’ Language
01:39 GMTThe Last Time the US Gave an Ally Nuclear Technology, France Tried to Quit NATO
01:36 GMTAntarctic Ozone Hole Now 'Larger Than Usual', Covering Entire Continent, Scientists Say
01:22 GMTTrump Allegedly Joked That Jared Kushner Is ‘More Loyal to Israel Than US’
01:15 GMTVogue Releases Video of AOC’s ‘Dress Prep’ for Met Gala
00:25 GMTNo New Date Set for Resumption of Pretrial Hearings of 9/11 Case in Gitmo, Spokesperson Says
00:06 GMTUS Closes Del Rio Port of Entry on Texas-Mexico Border Due to Influx of Migrants
00:03 GMTNew Research Sheds Light on How to Tackle Obesity
YesterdayWhite House Confirms in Touch With France Over Envoy's Recall, Will Work to Resolve Issues
YesterdayTop Senate Defense Panel Republican Says Biden Ultimately Liable for Kabul Drone Strike
YesterdayGantz: Israel Could Accept Return to JCPOA if US Has ‘Plan B’ for Iran’s Nuclear Program
YesterdayUS Judge Denies Giuliani’s Request to Return, Destroy Seized Evidence, Reports Say
YesterdayFrench Court Finds Man Guilty of Cartoons Portraying Macron as Hitler Over COVID-19 Policies
YesterdayAustralia's Great Emu War: How a Nation Declared War on a Bird and Lost
YesterdayBlinken Vows to ‘Keep Normalization Marching Forward’ on One-Year Anniversary of Abraham Accords
YesterdayEx-Algerian President Abdelaziz Bouteflika Reportedly Dies Aged 84