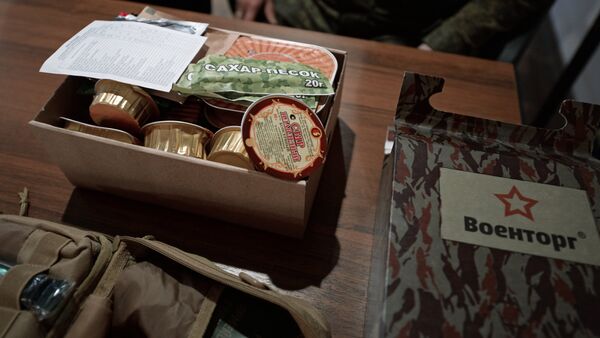 © Sputnik / Pavel Lisitsyn
/
Go to the photo bank
Subscribe
As the saying goes, "An army marches on its stomach," and there is no fighting force in the world exempt from this rule.

However, every nation has its own ideas about what a good field ration should be comprised of, so military prepackaged meals come in all shapes and sizes (sometimes literally).

So let’s take a look at what food fuels the world's armies while they are out in the field.

US Meal Ready to Eat (MRE)

One can only wonder why some people prefer to it as Meal Rejected by the Enemy.

Some canned beef with buckwheat porridge, biscuits, and tea – if you were looking for a plain meal, then this is it.

A nutritious ration with plenty of sugar, though the labeling may appear somewhat confusing to people not familiar with the US Food & Drug Administration Regulations.

The packaging of this ration is fairly impressively done and you can understand the written instructions even if you don’t know the language.

This may not exactly be the famous French restaurant cuisine, and there’s no wine included.

Tasty and filling, this secret weapon of the Russian military keeps the troops fed and morale high.

A simple but nutritional meal.