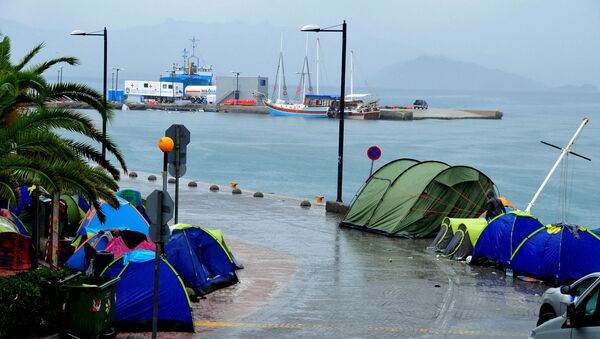 © Flickr / Heinrich-Böll-Stiftung
Subscribe
The refugee crisis in Greece is "immense" and the number of people migrating to the Mediterranean country is still expected to surge this summer. 880,000 people have arrived in Greece since 2015 and the European Commission (EC) is insisting the Greek government handle the crisis better.

Progress made by the Greek government in managing the refugee crisis is under heavy scrutiny from the European Commission and is said to threaten the future of the 28 nation bloc.

Back in 2011, conditions for asylum seekers in Greece were found by a court to be degrading, which meant that the EU Dublin regulations — stipulating that people must apply for asylum in the country where they first arrive in — had to be suspended.

"There are still key areas in the asylum process that need to be improved before the Dublin regulation can be fully applied to Greece again, notable in the areas of reception capacity and conditions, access to the asylum procedure, appeal and legal aid," the Commission stated.

The Dublin rules are set to be debated by EU member states in March.

If Greece fails to make progress, Brussels could authorize border controls within the Schengen zone for up to two years. This could threaten the country's economy which heavily relies on tourism.

"We have lost time already — this is a fact. And this is not acceptable," Dimitris Avaramopoulos, EU migration commissioner told reporters.

In September 2015, only eight percent of asylum seekers were fingerprinted when they arrived in Greece — that number has risen to 78 percent in January 2016, according to a progress report published by the EC.

Greece must build five 'hotspots' on the islands where refugees can be detained and processed — work has already started in Kos, one of Greece's most popular destination for tourists — and refugees.

If Greece fails to build the five hotspots — if faces the prospect of expulsion from the Schengen zone, which could potentially damage its tourism industry. However, the city council on the island of Kos is to hold a referendum on the issue over concerns a new shelter for 7,500 people would put tourists off.

#demonstration in #kos against the #hotspots for #refugees.Koans are afraid of its impact on #tourism industry pic.twitter.com/agBGUw1QYb

"I have instructed the municipality's director general to look into referendum procedures, so that Kos residents can decide whether they are for or against the construction of a hotspot," Mayor of Kos George Kyritsis said, accusing the European Union of blackmailing Kos into a decision.

Anger towards the construction of new hotspots has also been vented on the mainland, where protesters recently gathered in north west Athens against plans to turn a former military camp in to a center for illegal immigrants at Schisto.

Ioannis Tsamurgelis, an economist in Greece, recently told Sputnik that the country's current political unrest was reinforcing support for the Golden Dawn party, warning that the Greek government could become "very different to what the EU want".

And the EU wants hotspots, proper facilities for refugees and screening centers to cope with the "immense" situation threatening the bloc.

The refugee crisis, according to Tsamurgelis is a "bomb that is about to explode" in Greece.