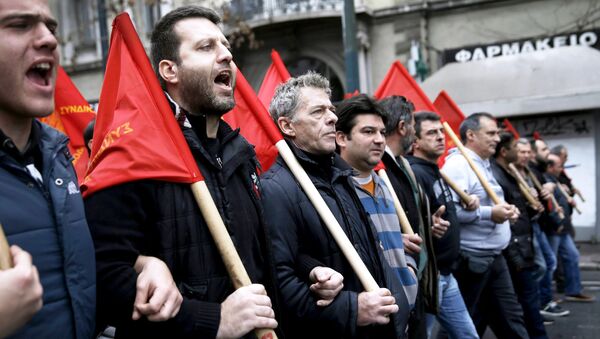 © REUTERS / Alkis Konstantinidis
Subscribe
International
India
Africa
Thousands of workers, farmers, professionals and pensioners are staging a 24 hour national strike in Greece on Thursday. Flights are grounded trains and ferries are stationary and hospital wards and schools are closed. Scuffles have broken out in central Athens between protesters and police using tear gas.

It’s the third national general strike since December following a series of protests against the proposed reforms to Greece’s pension system and tax increases, with doctors and lawyers joining the protest dubbed "the uprising of tie wearers".

"It’s not just an economic problem – it’s a social problem. The democracy of Greece is at stake."

Prime Minister Alexis Tsipras’ Syriza government needs to save 1.8 billion euros under the terms of its international bailout. Pensions have already been slashed 11 times since 2010.

​The Greek government say the nation’s pension system will soon collapse if the reforms are not passed through parliament.

"The reforms are causing social unrest and a very unequal society. There is political unrest and economic instability which are creating a very dangerous situation in Greece,” Tsamurgelis told Sputnik.

The European Commission has predicted that unemployment will drop to 24 percent in 2016 – which is still the highest in Europe. National debt is expected to reach 185 percent of Greece’s economic output this year – again, the highest in the EU.

The national strike has left hospitals manned with emergency staff, while farmers have used tractors to block traffic and travel links across the country have been paralyzed.

"The unrest is dangerous. It’s changing the political environment, the general atmosphere is explosive. It’s not just about the pension reforms — it is creating an unequal society. It will reinforce the Golden Dawn party and the government majority could end up being very different to what the EU want," said Tsamurgelis.

The economic crisis, which once dominated Europe’s front pages, has been replaced by the refugee crisis. A crisis that affects Greece more than any other country and described by Tsamurgelis as "a bomb that is about to explode".

"The EU has not decided what to do yet. Germany has to be more serious and Europe has to take radical measures but is avoiding the refugee problem. The EU needs to force other come countries to resolve the issue," Tsamurgelis told Sputnik.

Thousands of Greek workers are gathering outside the Greek parliament in Athens putting the economic crisis firmly back on the political agenda and on front page news.