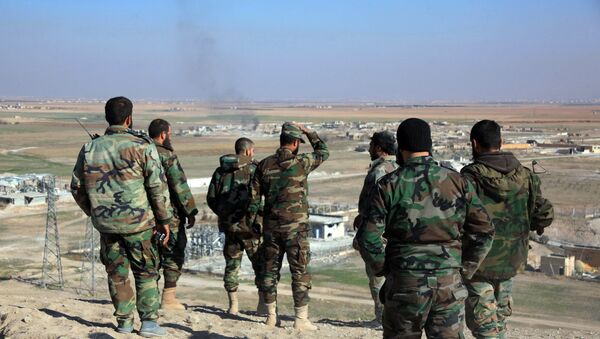 Russo-Syrian military actions on the ground indicate that Syria is not heading toward a "quagmire" or a low-intensity guerrilla war, but rather to a clear military outcome, former British intelligence (MI6) official Alastair Crooke notes.

The Syrian Arab Army supported by the Russian Air Force has taken control over the area that cut off Aleppo-based Islamic militants from the Turkish border, severing the main Turkey-Aleppo insurgent supply line.

This is the beginning of the end of jihadi presence in Aleppo. After 4 years of war & terror, people can finally see the end in sight #Syria

​"The tourniquet around Aleppo can be pulled off the city — and at the same time, one of the main ISIS [Daesh] oil corridors to Turkey is cut. If things proceed as they have been, with the regime advancing further into rebel-held territory, the red swathe of Syrian government forces will shortly expand to encircle all opposition forces (predominantly al-Nusra [Front] and ISIS), who themselves have been encircling Aleppo in the east," Alastair Crooke, former MI6 official, writes in his article for The Huffington Post.

The Aleppo Pocket: Turkey Running Out of Time for Its Plans to Invade Syria
Crooke emphasizes that if the Syrian Arab Army, moving north, makes friendly contact with the Kurdish People's Protection Units (YPG), almost all al-Nusra Front fighters and allied insurgents would be nearly surrounded.

He notes that the Daesh-controlled corridor with Turkey, especially near Jarablus, still remains open. Ankara has claimed the territory represents its "red line" and warned the Syrian Kurds against closing the corridor, threatening them with direct military conflict.

However, the YPG has turned a deaf ear to Turkey's vocal displeasure saying that it is currently considering such a move.

​Citing Russian Foreign Minister Sergey Lavrov, Crooke stresses that Moscow has made it absolutely clear to Ankara and its foreign backers that Russia plans to seal the area between Turkey and Daesh-held territory in Syria.

Losing the War, Blame Russia
"The key point for the ceasefire to work is a task of blocking illegal trafficking across the Turkish-Syrian border, which supports the militants. Without closing the border it is difficult to expect the ceasefire to take place," Lavrov said in an official statement.

That means Ankara risks direct confrontation with Russia in the event of a Turkish incursion into northern Syria.

"Recently, for whatever reason, [Daesh] forces have appeared to start pulling out of that area," Crooke remarks.

The former MI6 official calls attention to the fact that if Turkey were to conduct such a unilateral action, it would immediately lose any NATO support.

"To put it baldly then, as things stand, Syria seems to be heading not towards a "quagmire" as many western politicians have suggested, but rather to a clear military outcome… Nor, it seems, is Syria heading toward a low-intensity guerrilla war in the aftermath of any military victory on the ground," Crooke underscores, referring to the fact that al-Nusra Front and Daesh Islamists have little if any public support on the ground.

Kurdish militias take over Minegh town & airport N. Aleppo, which were taken by "moderate" rebels in alliance with Isis in 2013 #Syria

​Furthermore, Crooke predicts that Syria and Iraq will become strong regional powers with a prospect of outpacing certain Gulf realms.

Thoughtless actions of #NATO states have brought the Middle East region into the chaos, not the Rus #AerospaceForces https://t.co/lQK8aZZdU8

​"Western diplomats and military officers have become more used to quagmires that lead to no political outcomes, or to fudges that lead to stasis, rather than interventions that have a real conclusion," the former MI6 agent notes, adding that American and many European elites will find it hard to swallow the eventual Russo-Syrian victory.