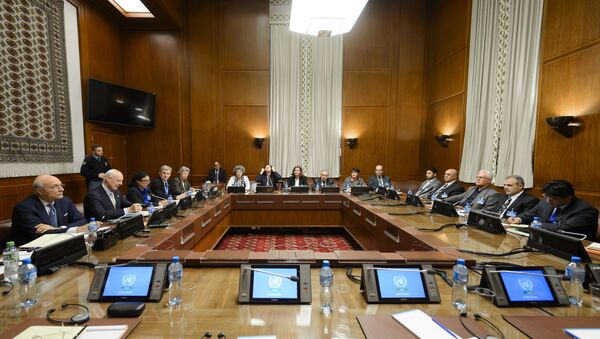 Qadri Jamil, one of the leaders of Syrian moderate opposition, said that interference of Turkey and Saudi Arabia in the intra-Syrian talks complicates the negotiations and Syrians must be independent.

GENEVA (Sputnik) – Interference on the part of Turkey and Saudi Arabia in the intra-Syrian talks complicates the process, one of the leaders of the moderate Syrian opposition told reporters.

"It complicates the talks. These are the intra-Syrian talks. Why do Riyad and Turkey [interfere]? Syrians must be independent," one of the leaders of Syria’s Popular Front for Change and Liberation, Qadri Jamil, told reporters.

Destroy Syria… Get Others to Pay
Earlier Friday, The Guardian reported that Saudi Arabia could send thousands of ground forces to Syria, most likely in coordination with Turkey, to take part in the fight against the Islamic State (ISIL), also known as Daesh, jihadist group.

On Thursday, the Saudi embassy in Washington, DC said via Twitter that the Saudi Ministry of Defense stands ready to deploy ground troops to Syria to aid in the international anti-Daesh coalition efforts.

The Russian Defense Ministry said previously it had "serious grounds" to suspect Turkey of preparing for a military incursion in Syria.

Turkey Planning Military Invasion in Syria - Russian Defense Ministry
UN Special Envoy for Syria Staffan De Mistura put the intra-Syrian talks on hold until February 25, claiming that there was more work to be done, especially regarding the humanitarian situation in the country.

The Saudi-backed group was criticized for setting preconditions before joining the talks, despite de Mistura launching the dialogue on January 29 without preconditions.