Destroy Syria… Get Others to Pay 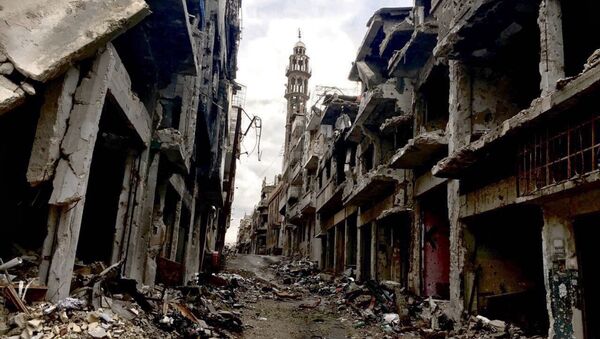 Finian Cunningham
All materials
Citizens of the world are being asked to dig deep for humanitarian aid to Syria. After five years of war and millions displaced there is an urgent need for the world to lend a hand, we are told.

Saudi Arabia Declares Its Ground Forces Ready to Invade Syria
At a so-called "donor conference" in London this week, British prime minister David Cameron appealed to the rest of the world to stump up $8 billion to help war-torn Syria.

Among the 60 nations attending the confab were the US, France, Britain, Turkey, Saudi Arabia and Qatar. Senior figures from these countries were wringing their hands in anguish over the plight of Syrian refugees.

Washington's top diplomat John Kerry told delegates: "With people reduced to eating grass and leaves and killing stray animals in order to survive on a day-to-day basis, that is something that should tear at the conscience of all civilized people and we all have a responsibility to respond to it."

Cameron, Kerry and the rest of these charlatans should spare us the emotional blackmail. Most of the governments represented at the London conference are the very instigators and perpetrators of Syria's destruction.

Why should the rest of the world pay for their crimes?

This is not to suggest that people should simply turn their backs on fellow humans in dire need. But let's get some straight-thinking here.

Those governments and individual politicians who oversaw regime change in Syria should be paying for their violations, either through massive financial reparations or in jail time. And why not both.

What Isolation? West Needs Russia in Syria as 'Key Diplomatic Power Broker'
It is only largely due to the dutiful dissembling by the Western news media that such criminality might seem rather outlandish. But it is not outlandish. It is documented and provable. Western governments are culpable in a criminal scheme of regime change in Syria, as they have been in countless other unfortunate countries.

From the outbreak of violence in mid-March 2011, the Arab country has been a charnel house of covert war involving the most vile terrorist mercenaries. Those who take ultimate responsibility for the violence are the authors of the regime-change plot in Syria. Top of the list are Washington, London, Paris, as well as their regional client regimes.

With an estimated 250,000 dead and nearly half of the 23 million population turned into refugees, the total war damage to Syria has been estimated to be at least $100 billion. This is what Washington and its allies owe Syria — and no doubt far, far more — and yet these country-destroying rogue states are trying to wheedle money out of world citizens to pay for their criminal excesses, with the emotional plea of "humanitarian aid".

Washington and its co-conspirators for covert war in Syria want the rest of the world to pay for their criminal scheming by cajoling the UN, the European Union and anyone else who will listen to fork out "humanitarian aid". Make no mistake this will eventually translate into ordinary taxpayers, workers and families, paying the bill for their governments' sanctimonious financial pledges.

Battle Royal: The Prospects of a Palace Coup in Saudi Arabia
In other words, Western powers like the US, Britain and France together with their regional client regimes in Turkey, Saudi Arabia and Qatar, unleash mass murder and mayhem on a once peaceful, sovereign country — and instead of being held to account under international law for their criminal aggression, these rogue states are getting the rest of the world to subsidize their evil enterprise.

The "donor conference" in London this week was the fifth in a series going back to 2012. Last year, the fundraiser fell well short of its appeals. This year, British leader David Cameron went out of his way to give the appeal added urgency.

Writing in the Guardian newspaper, Cameron said: "Sufficient funding to guarantee the basics of life that these refugees need must be the bare minimum expected of us."

The British premier emphasized the need for more aid given to refugee centers in Lebanon, Jordan and Turkey, where nearly five million Syrians have been displaced and are languishing in squalid camps.

Cameron's apparent concern belies his real worry. He doesn't want any more refugees streaming into Europe and towards Britain. That's why the British leader is now calling for more international donations and for the cash to be thrown at Syria's immediate neighbors in order to keep refugees there.

Going back to UN chief Ban Ki-Moon, he told the London conference:

"The situation in Syria is as close to hell as we are likely to find on this Earth."

Syria is indeed a hell on Earth. Made by people like Cameron and Kerry with whom Ban Ki-Moon was rubbing shoulders with in London this week.

Turkey was represented by prime minister Ahmet Davutoglu who tried to blame the humanitarian crisis on the Syrian government of Bashar al-Assad and Russia's military intervention. Davutoglu's lies are particularly nauseating given Ankara's role in acting as a conduit for terror brigades infiltrating Syria and his country's ongoing threats of outright military invasion.

NATO member Turkey's role in fueling Syria's refugee crisis through its regime-change machinations is acutely reprehensible. And yet Ankara is to receive $3.4 billion from European Union taxpayers, allegedly to help with stemming the flow of refugees into Europe.

This is just one aspect of the general trend that Washington and its allies are establishing with breath-taking audacity. They have all but destroyed Syria with their covert war using terrorist proxies, and yet they are getting the rest of the world to pay for their crimes.

The cost of war and imperialist crimes was always offloaded on to ordinary people by their rulers. In that regard, nothing much has changed. Except that the scam has become even more brazen.