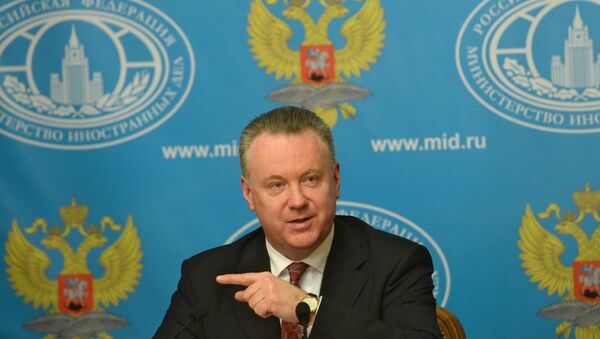 Russia’s permanent envoy to the OSCE said that Moscow is calling on Western countries to exert pressure on the Ukrainian authorities to ensure they implement the Minsk agreements.

Hollande Calls for 'Putting Life' Into Minsk Agreements
MOSCOW (Sputnik) – Moscow is calling on Western countries to exert pressure on the Ukrainian authorities to ensure they implement the Minsk agreements, Russia’s permanent envoy to the Organization for Security and Co-operation in Europe (OSCE) said, Friday.

"The developments of recent years have shown that our Western colleagues can have an impact on the Kiev authorities. It is high time for them to use this influence for peaceful purposes," Alexander Lukashevich said during the OSCE Permanent Council meeting.

According to Lukashevich, there is no viable alternative to the Minsk agreements as they are the only basis on which a peaceful political solution to the Ukrainian crisis can be founded.

"Delaying their implementation meets neither the interests of the citizens of Ukraine, nor its neighbors," the OSCE envoy said.

In February 2015, the leaders of Ukraine, Russia, Germany, France brokered the Minsk peace deal, later signed by representatives of Kiev and the militias of eastern Ukraine. The Minsk agreements stipulate a ceasefire, a weapons withdrawal from the line of contact in eastern Ukraine, constitutional reforms to decentralize power in the country, and the granting of a special status to the Donbas region.

The sides failed to fulfill the agreements' conditions by the end of 2015, as initially intended. The Normandy Four quartet agreed to extend the deadline for their implementation into this year.