Swiss Idea of Paying Everyone $30K/Year Sounds Nice, But Could It Work? 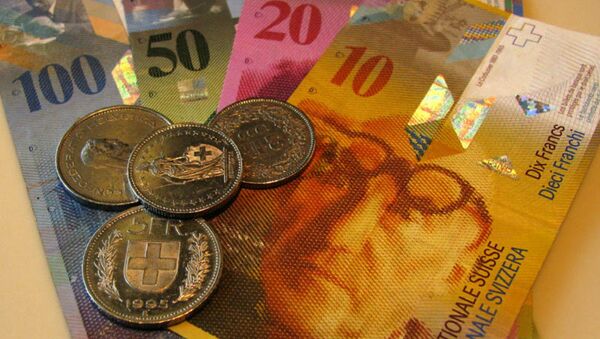 Switzerland's proposal for a universal basic income for all residents has received swipes from left for trying to destroy targeted government programs for the poor and unemployed, and from the right for making the system more unfair.

Switzerland's upcoming referendum on providing a guaranteed minimum income could fail not only because of wide-ranging criticism, but also because of mutual distrust.

Switzerland's government recently approved a referenum to provide a universal basic income (UBS) of 2,500 Swiss francs per month (roughly $29,300 per year) to all residents. However, although only two percent of people polled said they would stop working to live off the new benefits, 37 percent said that "others would stop working," according to Swiss daily the Local.

"We believe that Western countries have accumulated so much wealth and the economy is so productive that we must redistribute incomes in a smart way, so that every person living in Switzerland could fulfill their basic needs and have the minimum amount necessary for life, without any additional conditions," referendum initiative head Daniel Straub told Sputnik France.

Over 38,000 Secret French Accounts Worth €12Bln Found in Swiss UBS Bank
Switzerland is also known as one of the most expensive countries in the world, and living on less than 4,000 francs per month is considered a challenge by the country's labor unions.

An argument for the system is that it would simplify the existing welfare apparatus by simply paying everyone a lump sum, rather than looking at welfare payments on a case by case basis.

"Instead of complicating everything and using social welfare, of which many kinds exist, and which is every expensive in terms of organization because of its heavyweight administration, we are talking about a simplification, which allows everyone the minimum necessary for life," president of the Swiss Press Club, Guy Mettan told Sputnik France.

At the same time, the basic minimum income is an idea that would reduce employment in the social benefits sector of the government. According to Straub, increasing productivity is one of the things that lead to higher unemployment.

"The great task of the upcoming decades is to make people value unemployment, as it would allow us to live a fulfilling life," Straub told Sputnik France.

How people view unemployment and receiving an income regardless of whether they are eligible for benefits could also impact the program, according to Vincent Arlettaz, financial analyst and Secretary of the liberal FDP party, which is the country's third-biggest parliamentary party.

"From a moral point of view, it turns out that, on the one hand, I can watch my  neighbor go to work and say, 'You are now going to work to pay me,'  and on the other hand, this is a kind of injustice to the people who need the help of the state and who paid welfare contributions," Arlettaz told Sputnik.

According to Arlettaz, the measure could also limit individual freedom, and could lead the Swiss state to lose tax revenue. He noted that the new system would in effect destroy the principles of progressive taxation.

"If such a measure is implemented, it will need to be financed, and some will be asked to pay even more, while others will be asked to pay less. As a result, fewer people will be paying more taxes, which is already questionable from a moral point of view. If taxes are raised for some people, they just leave together with a part of the economy, and thus it will become more difficult to finance the others," Arlettaz added.

According to Swiss legislator Jean Christophe Schwaab, member of the second-biggest Social Democratic Party, the vague wording of the proposal would lead to lower wages and warped by the politicians opposed to the measure.

"It is formulated in general terms, it says nothing about the amount or the financing, which means that the federal parliament, the majority of which adheres to right-wing views, would be able to make anything it wants out of it, and would be able to create a model of basic income, which would be just as anti-social as it is difficult to finance," Schwaab told Sputnik.

Switzerland is 'Unattractive as Never' for Asylum Seekers in Europe
According to Schwaab, the idea presents a bad solution for problems such as widespread part-time and temporary employment, as well as the fact that once the basic income is introduced, employers would reduce that amount from their employees' pay.

Schwaab added that with the basic income, targeted government programs for education and reintegration into the workforce would also be lost if the measure is implemented.

Swiss voters are to approve or reject the universal basic income in a referendum in June.