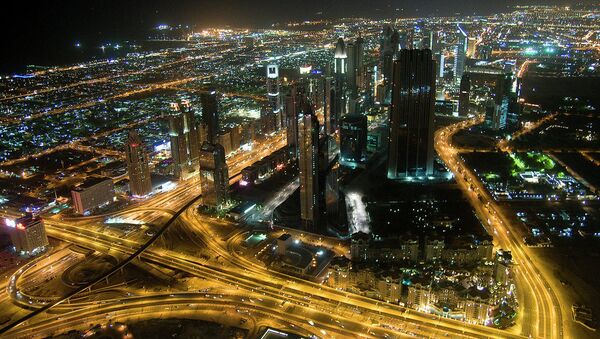 Following the collapse of oil prices, petrol in the United Arab Emirates has become cheaper than some basic commodities, including drinking water.

Motor-fuel prices have dropped to an unprecedented level, according to the local newspaper The National. One liter of Special gasoline currently costs 40 cents. Meanwhile, you can buy 1,5 litres of Evian potable water for $2.15, one liter of Pepsi — for 80 cents. Six eggs cost $1.06.

"While it's always nice to save money in Dubai, it's scary to think of the effects of low oil prices and what's happing to the economy as a result of it. It's a bit scary for Dubai residents," Dubai resident Yasmine Saade told the newspaper.

Environmental specialist Hassan Galadari shared his concern that the downslide of petrol prices will hinder the transfer to more cost-effective cars which are less harmful for the environment.

Oil Prices Unlikely to Let Economies Recover in Short Term
In the last year since January 2015, Brent oil became 30 percent cheaper — the prices dropping from $52 to $35 dollars for a barrel. The reasons behind this major decline include the more moderate growth of China's economy (China is one of the world's primary consumers of hydrocarbon), OPEC's policy of increasing oil output, and the lifting of anti-Iran sanctions.

UAE Energy Minister Suhail Al Mazrouei believes the global oversupply of crude will decline this year, even after Iran adds an expected 500,000 barrels per day in oil output.

"Iran's possible production increase of 500,000 barrels per day this year won't be enough to meet the expected demand," he said. "It's difficult to see where the new oil supply is coming from this year to fill the expected annual demand increase of at least 1.3 million barrels a day."