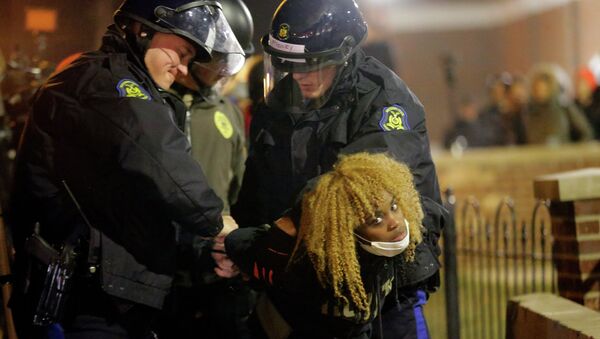 Ferguson has reached an agreement with the US Department of Justice aiming to restore trust between law enforcement and the public.

Ferguson Cop Who Threatened to Kill Journalist, Complains Life is ‘Ruined’
WASHINGTON (Sputnik) – The city of Ferguson has reached an agreement with the US Department of Justice aiming to restore trust between law enforcement and the public, which has expressed massive discontent over the fatal shooting of unarmed African American teenager Michael Brown by a white police officer.

"The provisions of this Agreement are meant to ensure protection of the constitutional and other legal rights of all members of the community, improve Ferguson’s ability to effectively prevent crime, enhance both officer and public safety, and increase public confidence in the Ferguson Police Department (FPD)," the consent decree, released on the city website on Wednesday, says.

The agreement stipulates, among other things, the creation of a civilian board to review complaints against the police and allows videotaping when a law enforcement officer asks for consent to conduct a search.

The consent decree still needs to be approved by the City Council. Three public hearings have been scheduled ahead of the February 9 Council vote.

The shooting, which was one of a number of cases where white officers shot African Americans, sparked massive protests and a nationwide debate on police brutality and racial profiling by US law enforcement officials.