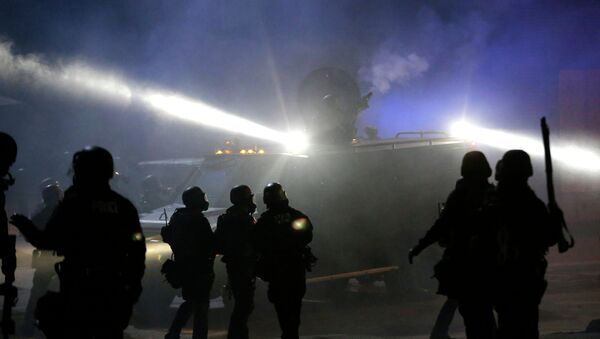 © AP Photo / Charlie Riedel
Subscribe
International
India
Africa
The Ferguson police officer, nicknamed “Officer Go F*ck Yourself” after pointing his weapon at a livestreamer and threatening to kill him, is now crying that his life is ruined.

Livestreamer John Zeigler was broadcasting the protest online, not participating, when he was approached by St. Ann Police Officer Ray Albers who had his AR-15 drawn.

“You’re going to kill him?” asks a bystander.

“Did he just threaten to kill me?” Ziegler asks.

When the officer is asked his name, he responded, “go f*ck yourself,” hence the nickname.

The officer resigned from duty a week later, and now the state of Missouri has stated that he acted “without legal justification,” and that his threat to commit a violent felony, of murder, was against the law.

Last week, Albers stood before the Missouri Department of Public Safety for a hearing on whether or not the Administrative Hearing Commission should take disciplinary action against him or revoke his law enforcement license.

“There’s selective enforcement against Mr. Albers, in a situation where we have now seen at least a dozen officers in the selected photos having their rifles raised,” his attorney, Brandi Barth, argued. “This situation of 30 seconds in a 20-year career has literally ruined his life.”

UN Says Ferguson Community Has Right to Peaceful Protest
The officer claimed that he was pursuing a “half a dozen” black males who had came out of the meat market armed and wearing bandanas. Unfortunately for Albers, three videos were played during the hearing and none of them corroborated his story. No such men are seen in the videos, and he was certainly not pursuing anyone as he pointed his loaded semi-automatic rifle in the face of journalists.

“He raised his rifle and asked people to ‘get the fuck back,’" Barth said. "That’s what happened, and unfortunately he became the media poster boy for bad behavior."

A ruling on his case is expected to be made within the next few months.