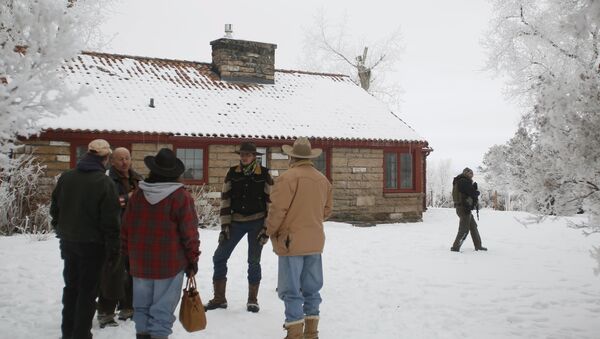 One member of the Oregon militia group which took over a US federal government wildlife sanctuary was killed and another was injured during a highway shoot-out between the militia and federal agents; the group's leader was taken into custody.

Two Activists Raise $60,000 in Campaign to End Oregon Militia Standoff
A highway shootout in Oregon between US federal agents and members of the militia group Citizens for Constitutional Freedom, who had seized a federal wildlife sanctuary, left one dead and another injured at 4:25 p.m. on Tuesday. FBI agents arrested militia leader Ammon Bundy, along with his brother Ryan and three other militia members.

​Earlier it was reported that hospitals had been put on lockdown and highways had been closed near the scene after reports of shots fired.

Bundy's group seized control of Oregon's Malheur Wildlife Sanctuary, a US federal installation run by the Department of the Interior, on January 2, 2016. The group, which claimed to have 150 members, was protesting the jailing of two local ranchers — Dwight Hammond, Jr., 73, and his son Steven, 46, who reported to prison earlier this month to finish five-year prison sentences for setting grass fires (controlled burns) for agricultural purposes which spread into federal land in 2006. Although US District Judge Michael Hogan concluded that sentencing the pair for the required five years was disproportionate to the severity of the offense, new federal sentencing mandates established under a 1996 anti-terrorism act specified tough penalties for burning federal property.

Oregon Republicans Express Support for Militia's Actions
Bundy demanded the release of the Hammonds, but the two rejected Bundy’s support and voluntarily surrendered themselves to the authorities to complete their prison sentences.

Bundy is not a native of Oregon but came there from the state of Nevada where his father, Cliven Bundy, led a 2014 confrontation with federal officials over grazing rights on land controlled by the US government. Numerous military veterans and individuals who describe themselves as American patriots came to defend the Bundy family from an armed assault allegedly prepared by the federal authorities.

The occupation cost the United States more than $100,000 per day and provoked a backlash against him.