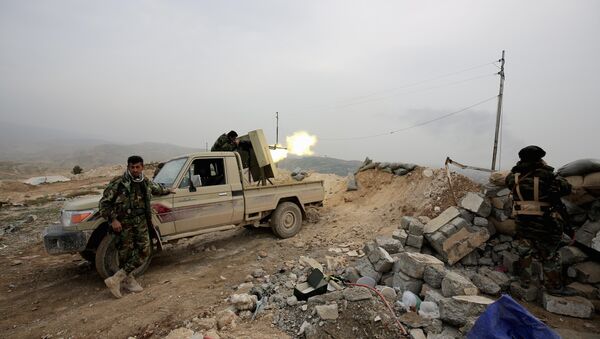 Dozens of Daesh mujahideen were killed and many more retreated amid fierce clashes with Peshmerga not far from Mosul.

US-Led Coalition Reports Sharp Escalation of Airstrikes on Daesh-Held Mosul
While awaiting as the Iraqi army gets prepared for the liberation of Mosul, the Kurdish armed militia Peshmerga spent their time in recurrent skirmishes with Daesh fighters who dared to come too close to their outposts. Pilots from the US-led coalition provided air support or, to omit the vague military slang, attacked terrorists from above.

​Some two dozen militants from Daesh have reportedly lost their lives and about the same number were wounded in the most recent clashes with the Kurds that broke out on Saturday in the district of Makhmur about 100 kilometers (62 miles) southeast from the terrorist stronghold Mosul.

“Daesh terrorists attacked our (Peshmerga) headquarters in Makhmur district southeast of Mosul, using car bombs and mortar shells,” a Peshmerga statement read, as quoted by ARA News. “At least 20 terrorists were killed and 28 more wounded in the clashes before the group withdrew from the area towards its strongholds in Mosul.”

Trucks packed with explosives failed to blow up positions held by Peshmerga, Waar Media reported. Daesh lost 32 fighters in the intense battle with the Kurds, who used mortars to repel the attack, the Kurdish news outlet detailed. Coalition aircraft were also involved.

​An international coalition airstrike was confirmed to be carried out south of the town of Makhmur on the same day.

It was not specified whether an attack fighter or remotely piloted aircraft was utilized in the mission by the western allies.