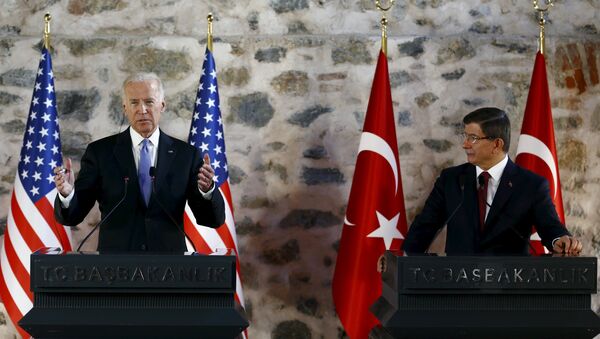 The United States and Turkey are ready to use a military solution against Daesh (Islamic State) in Syria if the Syrian government and various rebel factions fail to find a political solution in the upcoming peace talks in Geneva, according to US Vice President Joe Biden.

In a meeting with Turkish Prime Minister Ahmet Davutoglu in Ankara, Biden said that he'd prefer a political solution to the Syrian crisis, but if diplomatic measures won't work then the United States would pursue a military solution.

"We do know it would better if we can reach a political solution but we are prepared… If that's not possible, to have a military to this operation in taking out Daesh," Biden said during a news conference, as cited by Reuters.

After Biden's speech, the White House issued a statement clarifying that when Biden mentioned a military operation in Syria, he was speaking exclusively about the anti-Daesh campaign, not the Syrian government or anyone else.

"The Vice President was making the point that even as we search for a political solution to the broader Syrian civil war, we are simultaneously pursuing a military solution against Daesh. There is no change in US policy," the statement said.

Meanwhile, the intra-Syria peace talks are expected to take place at the end of this month. Initially, the negotiations were set for January 25, but later were postponed for a few days for practical reasons. The much-anticipated talks between the Syrian government and various opposition factions will take place in the Swiss city of Geneva.

US Syrian Rebel Training Program to Fight Daesh Doomed From Start - Media
Biden and Davutoglu also discussed how the United States and Turkey could support Syrian rebels who are fighting against the government of Syrian President Bashar al-Assad.

If that's the case then it might be bad news for Washington, as everyone remembers how miserably the US program of training "moderate" Syrian rebels failed not long ago.

At the same time, Washington and Ankara's plan to support Syrian rebels, some of whom in the past joined the ranks of terrorist organizations, such as al-Nusra Front, could mean that the Syrian Civil War would continue.

Syria has been in a state of civil war since 2011, with government forces fighting opposition factions and militant groups, such as Daesh and al-Nusra Front.