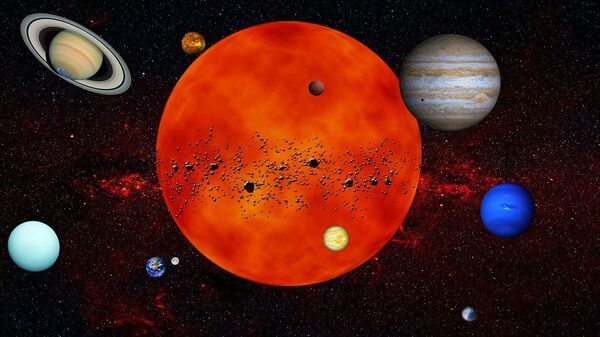 © Photo : Pixabay
Subscribe
International
India
Africa
Despite a very solid argument hypothesizing that our solar system appears to have a previously unknown ninth planet, a scientific quest to officially prove the existence of the hypothetical distant planet continues, Konstantin Batygin, one of the plenary scientists who authored a new report, told RIA Novosti in an exclusive interview.

A new report published in the Astronomical Journal on Wednesday said there might be a previously unknown planet roaming the outskirts of the solar system.

Batygin and his colleague Mike Brown from the California Institute of Technology (Caltech) in Pasadena suggested that the new large planet, dubbed Planet X or Planet Nine, is hidden somewhere beyond the orbit of Neptun, the eighth planet, and is believed to be ten times the size of Earth.

"We think that it's possible to [officially] discover Planet 9 within a few years," Russian-born Caltech scientist Batygin told RIA Novosti.

Science & Tech
Astronomers Expect Discovery of Giant Unknown Planet Outside Solar System
Batygin said that currently there are two telescopes powerful enough to potentially show the hypothetical planet — the Japanese telescope Subaru and the US-owned Keck telescope both of which are in Hawaii.

The Subaru telescope in particular can be of great help. It has a large light-gathering area to detect such a dim object like the hypothetical Planet X. This coupled with the Subaru's huge field of view can help astronomers to scan large areas of the sky every night, Science Magazine reported.

Planet X appears to be orbiting around the Sun at a distance 250 times farther than Earth. It would take Planet X some 10,000-20,000 years to make one full circle around the Sun.

"Our model can predict the orbit. However, it cannot predict the planet's exact positioning in the orbit. But we think we know the orbit pretty well," Batygin said.

The plenary scientist said that the hypothetical new planet was probably formed at the same time as Uranus and Pluto, and therefore it probably has a similar chemical composition.

The discovery means that the solar system could once again have nine real planets, after Pluto was demoted to the status of dwarf planet 10 years ago.

Our Galaxy most likely has more undiscovered planets orbiting somewhere outside of our known reality, Batygin added.

When asked whether there might be a distant extraterrestrial civilization that can be discovered with the help of the new powerful telescopes, Batygin emphasized that we cannot really talk about the existence of other civilizations without the proper understanding of how life was formed on Earth and without a full study of our solar system.