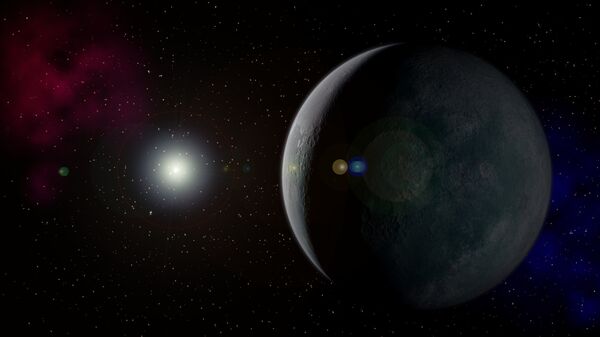 © Flickr / Kevin Gill
Subscribe
International
India
Africa
Researchers have announced new hints pointing to the existence of a hitherto undiscovered planet orbiting on the outskirts of the Solar System.

A Strange New World: Planet With Comet's Tail Discovered
Unusual orbital perturbation and alignment of a number of frozen space objects just outside of Neptune’s orbit have enabled US astronomers to suggest that there is a large planet hidden beyond the orbit of the eighth planet. It is suggested to be ten times the size of the Earth, a detailed report published in the Astronomical Journal on Wednesday exposes.

The hypothetical planet, dubbed Planet Nine because it is expected to be the ninth planet of the solar system should it be discovered, traces a highly elongated orbit about 55 billion miles (90 billion km), or about 20 times, farther from the Sun than Neptune, currently the most distant planet in the solar system. A full orbit of Planet Nine is projected to take up to 20,000 years, according to the report. Comprehensive mathematical modelling and computer simulation were used in the predictive process.

Super-earths are most common planet known to humanity right now, but none in SolSys… Unless… Planet 9? pic.twitter.com/yLpXtyEVgA

​“For the first time in over 150 years, there is solid evidence that the solar system's planetary census is incomplete,” a co-author of the paper, Konstantin Badygin, associate professor at the California Institute of Technology, told Caltech news service. “There have only been two true planets discovered since ancient times, and this would be a third,” co-author, Professor Mike Brown, also of Caltech, explained. “It’s a pretty substantial chunk of our solar system that's still out there to be found, which is pretty exciting.”

Now, the task for stargazers worldwide is to visibly confirm the existence of Planet Nine, somewhere within the calculated planetary orbit.

“We hope that our calculations trigger an observational hunt for Planet Nine,” Badygin said in a blog post, “And we will one day wake up to learn that solar photons that have reflected off of Planet Nine’s frigid surface, have landed onto the aperture of a terrestrial telescope.”

So where is Planet Nine and how bright is it? I finally have enough time to post. https://t.co/0w67OorQiX HINT: it is not super faint!