Obama's Priority, TPP, Is Even Worse Than Thought - Kevin Zeese 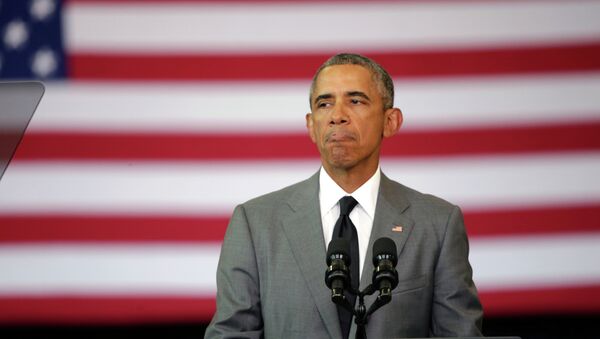 The TPP is a wide-ranging economic agreement between 12 countries in the Asia-Pacific region and the Pacific coasts of the Americas primarily aimed at deregulating trade. In October, the parties reached an agreement on the wording and subject matter of the TPP. The details of the controversial trade deal were then revealed to the public, after almost seven years of negotiations.

"The sad reality is it's worse than we expected. Seeing it all, we see it's … essentially a global corporate coup where corporations become more powerful than governments," Zeese told Sputnik Radio's "Loud & Clear."

​Negotiators spent years working behind closed doors to create the 6,000-page agreement that, according to Zeese, covers "all aspects of our lives."

More than 500 corporate representatives monitored and edited the agreement for US trade representatives. US lawmakers, Zeese said, had to go through “a lot of hoops” to view the details. Even then, legislators were prohibited from making any recording or copy of the agreement and could not discuss it with their staff, let alone their constituents.

"So it was kept secret because [negotiators] know that as people see what’s in this agreement, it loses support," he said.

According to Zeese, the main beneficiaries of the hotly-debated TPP will be the "poorest countries" which can "bring in some slave-wage jobs."

The Obama administration claimed the TPP will create hundreds of thousands of American jobs. However, the administration abandoned that claim after it was discredited by the Washington Post, Zeese said.

In reality, the TPP will benefit the 'trans-national corporate powers" in the United States, Zeese said. While in poorer countries, the agreement will serve "people in charge of those governments, usually oligarchs who in various ways run the governments."

"So it's the wealthy versus the workers; that's really what these agreements are about," Zeese said.

Obama and the heads of other nations party to the TPP will formally sign the agreement on February 4 in New Zealand. After that, the president can send it to Congress at his leisure. Each nation state that is party to the deal must ratify the agreement within its own government before the hotly debated treaty can come into effect.

Obama called the TPP his top legislative priority of 2016. But, because of how difficult it is now to pass controversial legislation, Zeese said, the president may wait until after the November election to send it to Congress for a vote.