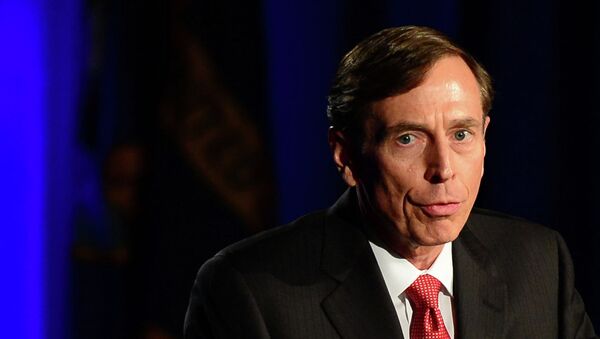 Former CIA Director and four-star General David Petraeus may be demoted in rank for leaking classified materials last year, US media cited three people with knowledge of the matter as saying late Monday.

WASHINGTON (Sputnik) – Petraeus pled guilty to one misdemeanor count in spring, and was sentenced to two years' probation and a $100,000 fine for sharing classified information with his biographer and mistress. The US Army has recommended Defense Secretary Ashton Carter not to reduce Petraeus in rank.

"The secretary is considering going in a different direction," a defense official told The Daily Beast online news publication, citing reasons of "consistent…treatment of senior officers who engage in misconduct."

Pentagon spokesman Peter Cook told the outlet the Department of the Army was "still in the process" of providing information to Carter on the matter.

"Once the Secretary‎ has an opportunity to consider this information, he will make his decision about next steps, if any, in this matter," Cook said.

The unnamed sources said the potential lowering in rank would be seen as a message for other military officials that "even men of Petraeus's fame and esteemed reputation are not immune to punishment."