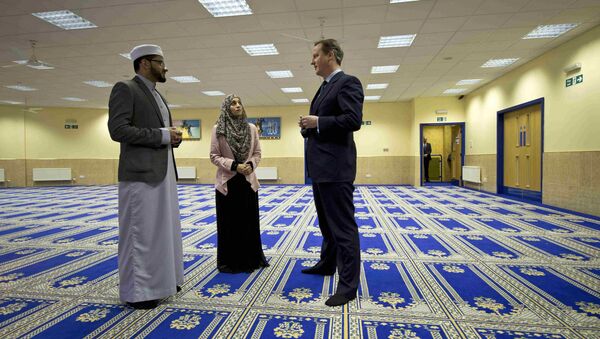 © REUTERS / Oli Scarff
Subscribe
UK Prime Minister David Cameron has been accused of stigmatizing British Muslims with homegrown terrorism after saying that Muslim women in the UK who did not speak English were "more susceptible" to the propaganda of jihadist groups like Daesh.

Cameron made the comments during an interview with BBC Radio 4, where he announced additional funding for a program aimed at helping Muslim women in the UK improve their English language skills and avoid segregation in wider society.

Segregation drives us apart — not together. My article for this morning's The Times:Where in the world do you think…

"This is about building a more integrated, cohesive, one nation country where there is genuine opportunity for people," Cameron said.

"Of course, if you don't speak the language your opportunities are very much reduced."

While the prime minister said it would be "ridiculous" to draw a "casual" link between poor English skills and extremism, he raised concerns about the vulnerabilities of people unable to speak English in the UK.

"If you're not able to speak English, not able to integrate, then you may find therefore you have challenges understanding what your identity is. Therefore, you could be more susceptible to the extremist message from Daesh."

The plan to invest US$31 million (£22m) into language programs comes amid the unveiling of tougher immigration rules threatening to deport people with poor English proficiency.

It has also been revealed that despite the latest injection of funding, the government slashed US$64 million (£45m) from English language budgets late last year, on top of earlier cuts in 2011.

Cameron's comments about certain Muslims being susceptible to extremism were widely criticized by political opponents, who accused the PM of "stigmatizing" Britain's estimated Muslim population of 3 million.

I'm curious: Is David Cameron going to ask the non-Welsh speakers in Wales to sign up to language classes too? Oh, wait, of course not.

Liberal-Democrats leader Tim Farron said the PM's attempt to link British Muslims and extremism "only serves to isolate the very people Cameron says he is trying to help," while Mohammed Shafiq, chief executive of the Ramadhan Foundation accused the prime minister isolating Muslims for political purposes.

"David Cameron and his Conservative Government are once again using British Muslims as a political football to score cheap points to appear tough.

"There are three million Muslims in this country and the Prime Minister chooses to focus on a very small minority of extremists when clearly the majority of British Muslims reject extremism."

Despite Britain's estimated 3 million Muslims making up less than five percent of the country's overall population, the government has single out Islamic extremism as one of the country's greatest threats to security.

Debate on the matter has also increased after a number of high profile Britons, including Londoner Mohammed Emwazi, also known as Jihadi John, featured heavily in the propaganda of jihadist groups like Daesh.

Follow the Money: UK Gov't to Investigate Foreign Funding of UK Jihadis‏
Last month UK police said they believed at least 700 Britons had traveled to Syria or Iraq to support or fight alongside jihadist groups, while about half of those have since returned Britain.

UK security forces had been criticized for their border control after it was revealed that up to a dozen Britons with extremists links had been able to flee the country in the recent times, despite being on bail or under surveillance.

However, Foreign Minister Philip Hammond has defended the work of intelligence and security services, saying that 600 people had been stopped from leaving the UK over fears there were heading to fight alongside jihadists in the Middle East.