Chief of Naval Operations: US Must Respond to New Russian Maritime Strategy 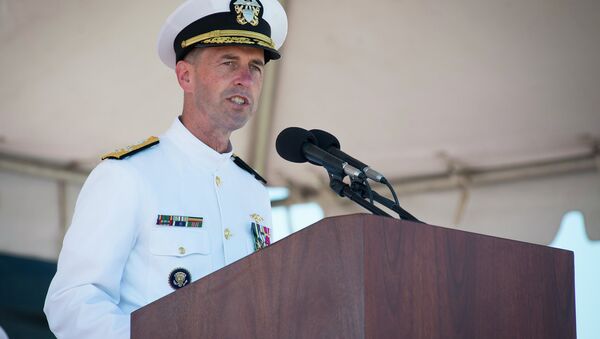 US Chief of Naval Operations Adm. John Richardson said that the US navy must take steps to address the newest Russian maritime strategy.

"The Russians just put out a maritime strategy which is very forward-leaning, and so, of course, we must, I think, respond to that threat. Not to do so would be negligent," Richardson stated at the National Press Club.

Richardson noted that in discussions with his European counterparts in Eastern Europe along the Black and Mediterranean Seas, "they were very focused on that rising…Russian maritime challenge."

According to the US navy, Russia has been maintaining a naval task force in the Mediterranean consisting of up to 10 combat and support vessels since the end of 2012. Last week, Russia’s Varyag guided-missile cruiser joined the Mediterranean task force as part of its mission.

Richardson also claimed that the improvements in the Russian and Chinese navies marks the resurgence of great power competition among rival nations with global reach.

"The Russian Navy is operating at a frequency and pace not seen for more than two decades, the Chinese Navy… is extending their reach around the world," Richardson said in a speech at the National Press Club on Monday. "This is great power competition."

The US rivalry with its Russian and Chinese competitors is characterized by "a growing arsenal of high-end warfighting capabilities… and are focused specifically on our [US] vulnerabilities," Richardson stated.

Richardson did not discuss future measures the United States may take, but acknowledged it will "think hard and come up with some options" to address the competition from Russia and China.

In July 2015, Russian President Vladimir Putin outlined a new maritime strategy. The doctrine included reestablishing a presence in the Mediterranean Sea, as well as increasing the existing Russian naval presence in the Black Sea, Atlantic and Arctic oceans.