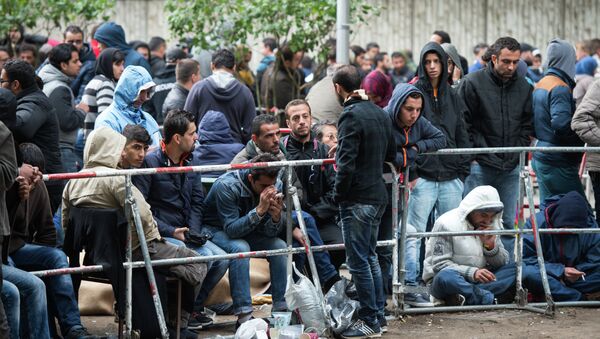 Germany cannot find any support in Europe for its stance on the refugee question: its partners are demonstratively distancing themselves from Berlin, a tendency that will become even more pronounced following the reprehensible events in the city of Cologne, according to Malte Lehming, an editor at Berlin’s Der Tagesspiegel daily.

“Europe’s Schengen system is on its deathbed,” Lehming states in his article for The National Interest magazine. Germany can’t find any support in Europe for its stance on the refugee crisis.

German Ruling Parties Call for Deportation of Criminal Refugees
The author explains, that the country’s partners are now demonstratively distancing themselves from Berlin in terms of the refugee question, especially after the notorious events in the city of Cologne, “where dozens of German women were sexually assaulted during a melee by over a thousand North African and Arab men on New Year’s Eve”.

“Now everyone in Europe is talking about “the Cologne atmosphere,” which they would prefer to avoid,” he adds.

The country itself remains divided over the issue.

“The police, for example, are sounding alarms because they are understaffed and overwhelmed,” the author says.

Eastern Europe Finds Itself Stuck Between Refugees, EU Authority
“Educators are sounding alarms because there aren’t enough instructors for introductory courses about living in Germany.”

“Towns are sounding alarms because they’ve run out of room for more refugees. And it’s unclear how long sports facilities will be used as temporary hostels, because no one knows how many more refugees will arrive.”

Meanwhile, the authorities are unable to suggest any further plan of actions, even though “a return to the cozy pre-refugee era is out of the question”.

“The refugees are here. They have to be integrated. But the way forward is shrouded in fog.”

Gender Equality Lessons: Europe Teaches Refugees How to Treat Women
“At the same time, sober discussion of the problem is impossible. The moral and political faction that represents what might be called Germany’s “welcome culture” rigorously throttles any attempt to discern a connection between refugees and the danger of Islamic terror. This became particularly clear after the recent attacks in Paris.”

The author however acknowledges that asylum homes are attacked daily. And the authorities are shutting down online forums because of the “viciousness of comments about asylum seekers”.

“One side has fear of over-foreignization, of Islam, of radicalization, of limitless immigration, “ the author says.

Violence Targeting Refugees Reaches 'Tragic Proportions' in Germany
“Their opponents have opened their hearts to the refugees and believe in their ability to integrate into German society.”

Still, Lehming cites the results of a poll by the Allensbach Institute, nearly half of all Germans are afraid to voice their opinion about the refugee crisis.

The skeptics of today’s refugee policy—the term “concerned citizens”, he says, is now being used as a term of aspersion by the pro-refugee faction—are not represented by any party in parliament, but are announcing themselves with increasing vigor in the media and in opinion polls.

“Is suppression at play here? That would revive a nasty theme in German history. After the Second World War, the crimes of the Third Reich were suppressed. During the Cold War, many did not want to acknowledge the crimes of the Communists. Are Germans now suppressing what awaits their country thanks to the high number of immigrants?” the author finally questions.