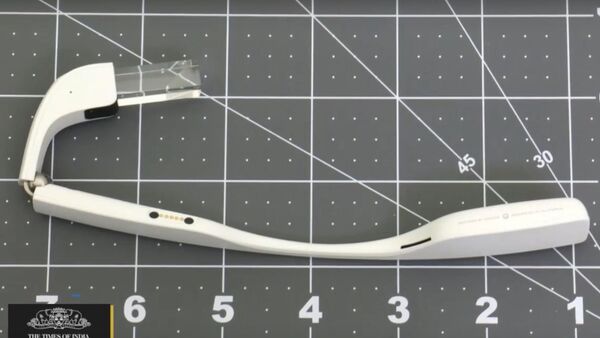 © The Times of India
Subscribe
International
India
Africa
An upgraded version of Google Glass, a head-mounted computer, is underway, despite the tech giant’s announcement last year that had suspended development of the project.

Google Glass 2.0 is real, and here are photos to prove it https://t.co/1o5EXigQWH pic.twitter.com/zrblzpjw2Q

​The first pictures to reveal the design of the new headset appeared in filings with the US Federal Communications Commission (FCC), the organization that reviews and approves personal electronics. The filing also included the device’s internal circuitry and a manual.

Science & Tech
Google Exec Projects AI Revolution, Issues Three 'Basic Principles'
The photos show that the new device is designated GG1, possibly after the classic US electric railroad locomotive, and in the documents resembles the original Google Glass headset. The GG1 will look like a set of eyeglass frames with a foldable arm holding a screen mounted above the level of the eyes.

Unlike the first Google Glass, the next generation of wearable computers will be developed as a business tool rather than a personal gadget, according to media speculation. The Guardian suggested it could be aimed at the manufacturing and healthcare industries, where hands-free devices would be extremely useful.

Rumors that Google was developing a new edition of its gadget began circulating in the media in July, despite no confirmation of the existence of the project by the company.

Tech blog 9-to-5, as well as The Wall Street Journal wrote that a new version of the Google Glass would have a larger prism, a sturdier design and include an Intel Atom processor. Other speculations suggested the gadget would be waterproof.

Killer Dog Soldiers: Google’s Useless War Robots Rejected by US Marines
In developing Google Glass, the company saw many challenges. The 2012-released device for developers and its 2013 successor, targeting consumers, were both widely criticized for being too expensive.

The public use of Google Glass raised concern because the device was seen as an intrusion into privacy, especially with regard to recording people without permission. Sales were officially ended in January 2015.

A re-launch of the project, now integrated into a business environment, would allow Google to avoid privacy concerns.