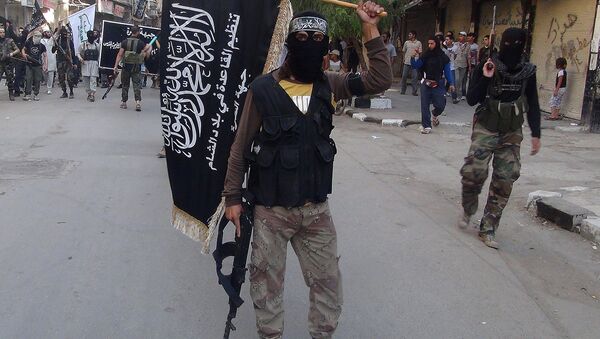 Daesh (Islamic State) has threatened to attack Israel. In an audio message allegedly made by the leader of Daesh, Abu Bakr Al Baghdadi, he said that Palestine will become a graveyard for Jews. Avigdor Eskin, Israeli analyst, told Radio Sputnik why the jihadist group threatened Israel, which didn’t take part in operations against Daesh.

“Israel was heavily involved in assisting Kurds and Yezidis from the very beginning. Daesh tried to commit real genocide against them so even Israel has some experience with Daesh. Israel was less active in Syria because the government forces of Assad are there and Russia is there,” Eskin said during the interview.

He went on to say that unrest in the Sinai Peninsula, on the other hand, is very troubling for Israel. “The Egyptian forces are trying to hold the activities of Daesh there, but the current cooperation of Hamas and Daesh makes it more troubling. They fought together against Assad in Syria, it is nothing new.”

Regarding the recent threat by the Daesh’s leader, Eskin said, “Daesh is losing hence their threat is not taken very seriously in Israel because they always threaten Israel. There is nothing new with that but unlike other terrorist organizations in the past; Daesh doesn’t have a clear infrastructure.”

“They have an ideological movement and they inspire young Muslim people to kill, stab and use terror actions. This is a very dangerous trend as they have no infrastructure and it is difficult to arrest them or even target them,” Eskin noted.

Israel's Shin Bet Arrest Suspected Daesh Operatives Plotting Terror Attack
Further explaining as to why Daesh has voiced threats against Israel the analyst said that Daesh is scared of Israel. “Israel has an experience with guerilla wars and Israel can use that against Daesh. Israel can use a certain strategy against it as Israel has experience in Gaza war and Lebanon.”

Eskin mentioned that everyday Israeli forces arrest various Muslim extremists’ members who join Daesh or are returning from there. Just like in other countries right now it is the same trend in Israel.

According to the analyst, Daesh is concerned that Israel will send troops to fight them. Israel knows how to use certain strategies against Daesh and not to harm the civilian population hence, Daesh is afraid that Israel will assist in these operations. Although the analyst noted that such an operation is not happening at present.