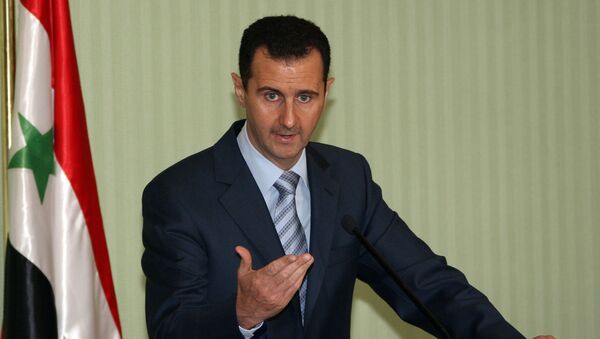 According to Syrian President Bashar-al-Assad, the fight against terrorism “should be a stable, sustainable principle” based on a real social support.

The US-led campaign has been targeting Daesh (Islamic State) terrorists in Syria for over a year, but has done little to halt the terrorist organizations activities.

According to the Syrian President, the fight against terrorism can’t be successful without ground troops. So far, none of the Western countries expressed readiness to deploy their ground forces in the country amid high security risks.

Moreover, many Western countries consider Assad's resignation an important precondition for the launch of the peace process. Western leaders argue that lasting peace in Syria is only possible if the current Syrian President leaves his post.

“Of course, we don’t accept this,” Assad said during the interview. “We are a sovereign country. If there is a good or a bad president, it's merely the Syrian, not the European matter. […] The Syrian people are to decide who goes and who stays. If people do not want to see me anymore, I’ll just go”.

Replying to the question of why hundreds of people are leaving Europe in order to become jihadists in Syria, Assad said, that his country with its current chaos is a fertile ground for terrorism that attracts radicals from around the world.  At the same time, he mentioned that European countries should pay more attention to why people in Europe tend to follow the radical course and work on preventing such tendency.

“This is logical to come here. Syria has been transformed by Europe, Turkey, Qatar and Saudi Arabia into a hotbed of terrorism. The most important question is how these people emerge in Europe?” the Syrian President said.

Triumph of Soft Power: Russia Sets the Tone in Syria Peace Plan
Assad named Russia, Iran and other countries that support the Syrian government and recognize its legitimacy among his true allies. The politician argued that these states are really contributing to the elimination of terrorism and establishment of the rule of law in his country.

Assad also expressed readiness to talk to all parties to the conflict, but doubted that Western states would dare to negotiate with Syria without an approval of the United States.

“There are only a few countries ready for this. No one dares to establish contact with Syria to resolve the situation as long as it does not appear on the agenda of the United States,” Assad concluded.