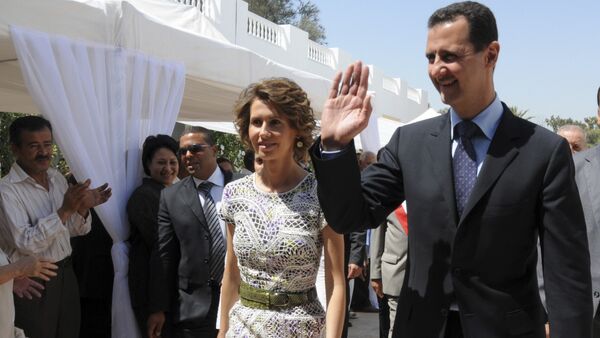 Bashar al-Assad, the democratically elected leader of a sovereign country, has been labeled as a "dictator" and "tyrant" by the West; however, the Western media-narrative falls apart at the seams as Bashar al-Assad continues to enjoy overwhelming support in Syria, geopolitical analyst Steven MacMillan notes.

Paradoxically, while the Western media keeps branding Bashar al-Assad as a violent oppressor of the Syrian nation, the Syrian President continue to enjoy public support; so what's the trick?

There is no trick, Scottish geopolitical analyst Steven MacMillan notes: the truth of the matter is that Bashar al-Assad, largely stigmatized by the Western press, is a democratically elected leader of a sovereign Syrian nation.

"'Butcher'; 'thug'; 'dictator'; 'murderer'; 'savage'; 'tyrant'; 'oppressor'; 'despot'. These are just some of the words that many in the Western world associate with the Syrian President, Bashar al-Assad, after four years of incessant and hypnotic war propaganda… The 2014 election in Syria is an event that the ‘Ministry of Truth' in the West desperately wants to be memory-holed, as it runs in stark contrast to the narrative they are still trying to inculcate in the minds of the public," MacMillan writes in his recent article for New Eastern Outlook.

Assad 'Thanks' West for 'Allowing' Him to Lead His Own Country
In June 2014 Bashar al-Assad won the Syrian Presidential election with 88.7 percent of the vote. It was the country's first multi-candidate election in almost 50 years.

Just imagine, in a country of 17,064,854 people over 10 million voted for Bashar al-Assad, MacMillan stresses.

"A group of international observers emphasized that the election was a valid and democratic expression of the views of the Syrian people," he notes.

Predictably though, Western nations denounced the elections labeling them as "fraud." So far, the West has deeply insulted the people of Syria. John Kerry even went so far as to brand the Syrian election as "farce" months prior to the vote.

Unfortunately for Western leaders, the Syrian people turned a deaf ear to the blatant propaganda campaign aimed at delegitimizing the Syrian presidential election.

"The Western narrative — which claims that Assad is an insane dictator who butchers his own people — is illogical, as if this was true, Assad would have been ousted years ago," the Scottish analyst points out.

Is Saudi Anti-Terror Coalition Created to Challenge Russia, Iran in Syria?
MacMillan quotes the interview al-Assad had given to RT in 2012:

"The problem is not between me and the people; I don't have a problem with the people. The United States is against me, the West is against me, many Arab countries including Turkey — which is not Arab of course — [are] against me, and if the Syrian people are against me, how can I be here?" Bashar al-Assad asked.

According to the geopolitical analyst, the Syrians understand that if Assad is toppled and government is destroyed, Syria will lose its sovereignty and will be partitioned by its rivals.

Instead of pointing the finger of blame at Assad, the Western leaders should have looked at the mirror first.

"Comparative to the plethora of imperial butchers in the Western world, who still manage to escape prosecution for their crimes, the Syrian President really is an angel," MacMillan emphasizes.