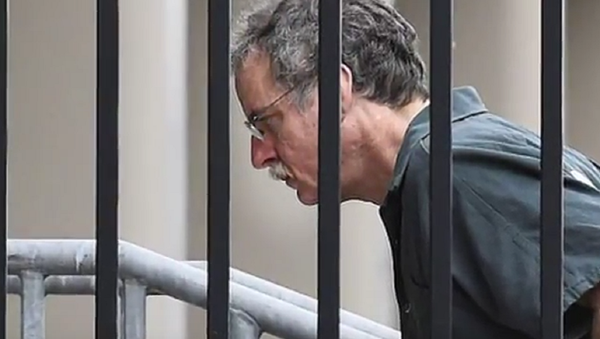 © Photo : YouTube (screenshot)
Subscribe
A New York man who planned to use a theoretical X-ray device, called "Hiroshima on a light switch," to kill Muslims and President Barack Obama has been sentenced to over 8 years in prison.

Eric Feight, of Hadson, New York, faced up to 15 years of imprisonment. He confessed in January 2014 to assisting Crawford in modifying a remote-controlled radiation-emitting device that they called a "death ray," and setting up a switch to manage it remotely.

"The sentence today highlights both the dangers we face when hatred and bigotry beget domestic terrorism and violent extremism, and our commitment to holding those who commit such crimes accountable," said US attorney for the Northern District of New York, Richard S. Hartunian.

Feight was arrested two years ago together with Crawford, who is awaiting sentencing, following charges of designing a weapon of mass destruction along with other allegations. Crawford faces a mandatory minimum of 25 years in jail and $2 million fine.

They were both accused of plotting to irradiate a mosque in Albany, New York, and a nearby Muslim school in 2013.

Man Convicted of Attempting to Build Radioactive Device to Kill Muslims
In a May 2012 recording played in court, Feight and Crawford discussed an attack on the White House.

Investigators found that Crawford went to North Carolina to seek financial assistance from a KKK leader who worked as an informant for the FBI.

According to the FBI report, a radiation source has not been secured to drive the "death ray" device and it is not operable.

Terrorist attacks continue to rattle not only the US but the world as well. This recent conviction was handed down amid mounting arrests of suspected hate crimes and misplaced abuse against Muslims following a recent terrorist attack by a Muslim couple in San Bernardino.