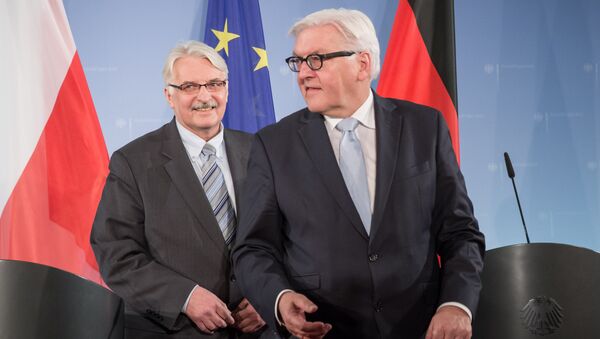 The Polish Foreign Ministry is stepping up its demands that NATO abrogate its 1997 pledge to Russia not to station substantial combat forces and nuclear weapons in Eastern Europe, and is growing more and more agitated with its German partners' commitment to abide by the treaty.

NATO Military Buildup on Russia’s Doorstep: Bracing for War?
In a Tuesday interview for German newspaper Berliner Zeitung, newly-appointed Polish Foreign Minister Witold Waszczykowski reiterated his government's position that NATO should invalidate its 1997 pledge to Moscow not to deploy substantial military forces to Eastern Europe, suggesting that the promise was made to "another Russia."

Moreover, the minister scolded Berlin for its apparent commitment to the assurances made in the 1997 NATO-Russia Founding Act on Mutual Relations, Cooperation and Security.

"However," Waszczykowski continued, "we are calling into question the political declaration that no major military forces would be stationed on the territory of new NATO members. We believe that such declarations are obsolete, since they were made to another Russia, one which did not act in an imperial manner and did not wage foreign wars."

The minister complained that the main reason why more substantial NATO forces have not been deployed to Poland is based entirely on the position of Germany, which, in his words, "is more concerned about Russia's interests than the security of Central Europe…So we want to ask our German partners: where is your solidarity toward your closest partner?" Waszczykowski asked.

Predictably, the foreign minister was similarly harsh in his criticism of the joint Russian-German project to build the Nord Stream II gas pipeline.

"We are shocked," Waszczykowski explained. "For many years we have been saying that Nord Stream I is a political project aimed at bypassing Central Europe and enabling [Russia, presumably, to engage in] blackmail. We explained this to the Germans, but they are repeating the same mistakes and are attempting to convince us that this is not a political pipeline, but a private, commercial project."

Nukes in Poland? ‘Warsaw Completely Controlled by US’
"But we were not born yesterday," the minister continued. "We know that on the one hand stands a powerful Russia, and on the German side, powerful companies which are implementing state policy. In general, we are seeing only a deterioration of Germans' attitudes toward Poland. But we want good relations and a better understanding of our concerns, in order to deploy NATO forces on Polish territory."

Waszczykowski's comments echo statements which he made to Polish media last month, when he declared that the 1997 NATO-Russia agreement was a political document adopted in a different global geopolitical situation, adding that the agreement's contents were not binding. For her part, Russian Foreign Ministry Spokeswoman Maria Zakharova responded by saying that Russia "considers these statements to be extraordinarily dangerous and exceptionally provocative," adding that the annulment of the treaty could "bring down the existing European security system."