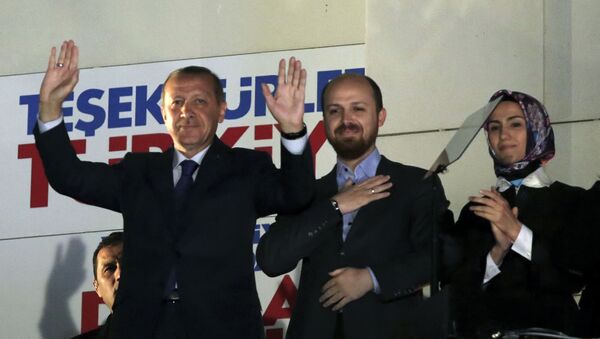 Despite mounting evidence to the contrary, the son of Turkish President Tayyip Erdogan has denied any involvement in the illegal oil trade which funds Daesh, also known as ISIL/The Islamic State.

To finance its terrorist activities, Daesh relies on its massive oil trade. Last week, the Russian Defense Ministry presented evidence which proved how, exactly, that oil was being sold: through Turkey, with the consent of the Erdogan family.

The Kremlin has pointed the finger squarely at Bilal Erdogan, one of the Turkish president’s four children, who owns a large shipping company and has access to a number of oil tankers.

Bilal has fervently denied these allegations.

"We build offices in Istanbul…We do not do business in the Mediterranean, in Syria or Iraq," he said, according to Reuters. "ISIS is an enemy of my country. ISIS is a disgrace. It puts my religion in a bad light. They don’t represent Islam and I do not consider them to be Muslims."

The president’s son has also claimed that he does not, in fact, control shipping activities, and maintains that his company only constructs the vessels.

Bilal also refuted suggestions that his brother’s company could be transporting oil for Daesh.

"He has a cargo ship, but it cannot be used as a tanker," he said.

As an alternative theory, Bilal proposed a familiar accusation: the Syrian government.

"If you follow ISIS oil, you will find Assad," he said, without offering any evidence to support the claim.

While Russia has presented satellite imagery detailing Daesh’s oil routes through Turkey, a number of other countries have also stepped forward with evidence against the Erdogan family.

During a meeting with German Foreign Minister Frank-Walter Steinmeier on Tuesday, Iraqi Prime Minister Haider al-Abadi backed up Russia’s claim. According to a statement posted to his website, al-Abadi "stressed the importance of stopping oil smuggling by the terrorist gangs of Daesh, most of which is smuggled through Turkey."

The Iranian government has also said it has evidence which implicates Turkey in the illegal oil trade.

"Iranian military advisors in Syria have taken photos and filmed all the routes used by ISIL’s oil tankers to Turkey," Iran’s Expediency Council Secretary Mohsen Rezaie told reporters on Friday. "If the Turkish authorities are unaware of the Daesh oil sales in their country, then we can provide them with such intelligence."

In November, Syrian Minister of Information Omran al-Zoubi accused Bilal of receiving oil from territories controlled by Daesh, and then shipping that oil to countries in Asia.

Even Turkey’s Western allies have been forced to admit Ankara’s role in supporting the terrorist group. As German newspaper Handelsblatt pointed out, Bilal Erdogan has a sordid history of corruption. In 2013, the paper writes, prosecutors suspected him of laundering money for his father. In 2014, a recorded phone conversation surfaced in which Bilal and Tayyip Erdogan discussed a ten million dollar payment, which Handelsblatt speculated could be in relation to the construction of an oil pipeline.

But the Erdogan family isn’t the only one ignored the evidence. The United States also continues to turn a blind eye to the actions of its ally.