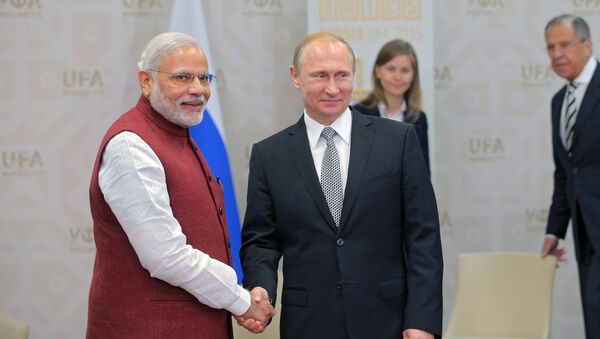 The upcoming visit of Indian Prime Minister Narendra Modi to Russia will stimulate bilateral relations and create new opportunities for companies from both countries to cooperate, the head of Russian Gazprombank's representative office in India told Sputnik.

"I believe that the visit of Mr. Modi will definitely bring something new into the relationship, both economic and political, between Russia and India. Especially now that Russia is being hurt to some extent by the sanctions, I believe this creates new opportunities for India as well as Indian businesses to export out of India into Russia and to buy the things they need in Russia," Sergey Mitreykin stated.

Russia should put more attention on the development of economic relations with the Asian region, in particular with India, especially since the West imposed sanctions against Moscow, the head of Russia’s Gazprombank representative office in India told Sputnik.

"I think that now we should put more emphasis on developing in Asia for two reasons, one of them is because you need to have equal access to both sides of the market plus everybody realizes that growth will be coming from Asia, especially from India," Sergey Mitreykin stated, adding that only after the introduction of the sanctions regime did Russia understood that it had overemphasized the develop of its economic ties with the West.

According to the official, India is one of the fastest growing economies in the G20, meaning it will soon play an even a more important role globally.

"This is where we should be concentrating our efforts now to develop our business. Asia and India, I would put [them] number one in this continent," Mitreykin stressed.

On November 13, Russian President Vladimir Putin said that Asia accounted for some 90 percent of foreign investment in Russia in 2015.

Moscow's common investment platforms with China, India, South Korea and the Gulf states have been important in attracting Asian investment in Russia, Putin noted, citing the BRICS New Development Bank and the Asian Infrastructure Investment Bank as examples of this.