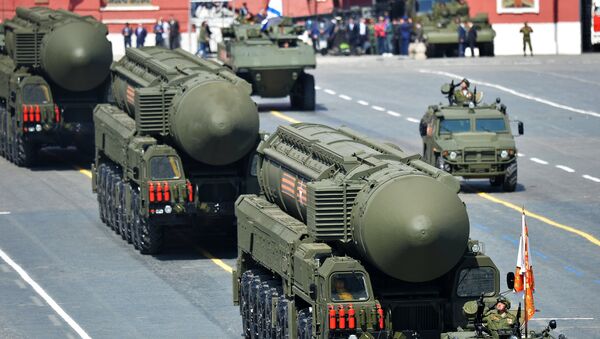 © Host photo agency
/
Go to the photo bank
Subscribe
Russia's nuclear arsenal surpasses the US and in the future it will be even stronger, the developer of the Russian strategic missile systems, the general designer of the ‘Moscow Institute of Thermal Technologies’ Yuri Solomonov said on Thursday.

Russia’s Tu-95 Bomber Upgraded to Carry New Nuclear-Tipped Missiles
“As long as there are nuclear weapons, there will be no war that’s for 100%. That is a guarantee of our security. Our nuclear arsenal is stronger than the American strategic nuclear force. And it will be even stronger. I am saying this not to brag but I know it professionally,” Solomonov said.

According to him, due to the nuclear weapons the world manages to avoid a new global conflict.

Solomonov said, “Thanks to nuclear weapons for 70 years there are no world wars on the globe whereas the local conflicts existed, exist and will exist. This is due to the fact that the presence of nuclear weapons and the fear of using them is so high that people are just afraid of that,” said the designer, who led the development of such missiles as the  ‘Bulava’,’ Yars’, ‘Topol’ and others.