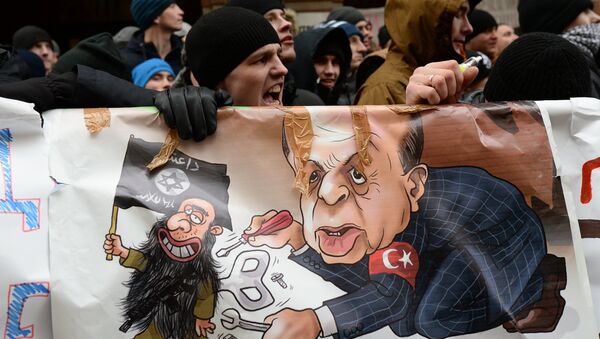 Readers of the Western press, be it American, British, German or otherwise, have expressed their complete outrage over the gunning down of the Russian bomber by Turkey in Syria, calling it “a grotesque overreaction and a bald faced attempt to give their jihadi buddies some help,” among others. Here are just some of the comments.

There is no doubt that good amount of planning and highest orders required for shooting down the Russian SU-24.

​“The EU needs to hold Turkey accountable for aiding the terrorists that committed the atrocity in Paris. ISIS (ISIL) gets most of its money from the oil it sells to Turkey,” he furthermore added.

“You have to wonder whose side Turkey is on right now. Whether or not Russian aircraft violated Turkish airspace means comparatively little when one considers the fact that the Su-24 was not targeting anything inside Turkey. This was a grotesque overreaction by the Turkish government and a bald faced attempt to give their jihadi buddies some help,” commentated user TDog on the same article.

PM of #Turkey was the man who ordered the shooting down of the #Russian su-24… this is going to get REALLY ugly. https://t.co/zEwucXrAjB

​Some of the commentators also note that Turkey provided a poor excuse for the shooting down of the Russian bomber.

“The Su24 was in Turkish airspace for what the Turks claim to be 17 seconds and no more than 1.5 miles inside what is actually a disputed border area. The area it crossed is actually a spur of claimed Turkish territory that abuts into Syria. The figures the Turks cite in their letter to the UN Security Council don't work out given that the stall speed of the Su24 is approximately 140 mph. Given the width of the spur and the amount of time the aircraft would've been at stall speed or very close to it. The stall warning hooter would have been going off in the cockpit,” reasoned user ngatimozart.

“They are hiding something and it might be that someone in the Turkish chain of command stuffed up,” he added.

“We need to recognise that Turkey and ISIL are one and the same."

​"When British airmen were shot down the Nazis used to run into the fields and shoot them as they drifted down in their parachutes,” user mel3 commented on an article in The Telegraph.

“So today we still have airmen being machined gunned until they are limp and drift down in their parachutes. All for supposedly being a few seconds in someones Turkish airspace. The same Turkish government who happens take regular delivery of oil tankers from Islamic State and supplies them with cash and weapons in return,” he added.

“17 seconds. That's how long the SU-24 was over Syrian territory. And you might as well say that it was on its way out of Turkish airspace as soon as it entered it — so the rules of engagement were NOT respected, as opposed to what Turkey claims. Besides, the SU-24 was hit over Syrian territory which goes even further against standard rules of engagement. This was not an engagement, it was an AMBUSH,” reasons user Euro_Hero, commenting on the same article.

So Erdogan keep on waging Turkey umpteenth war against #Europe: illegals invasion 4 the West and Russian SU 24 downing for the East

​“Finally, I would like to remind everyone that what the Turkmen rebels did, shooting a parachutist in the air, IS A GROSS VIOLATION OF THE GENEVA CONVENTION. That's right, and these are the kind of people that Turkey and some of us support against Assad. As well as Al Qaeda/Al Nusra and the Islamic Front against Assad- who like IS want Sharia law, no democracy and the slaughter of Shia communities as well as non-believers, generally speaking,” he adds.

“Turkey can certainly flex its muscles with NATO behind them, but the Russian jet was probably not a threat, 10 warnings or not, was it really necessary to shoot in this case?” wonders user Mullersun, commenting on the article in the German Der Spiegel.

“Ooophs — Mr Erdogan. Looks to me as if Turkey was just waiting for a half-chance to shoot down a Russian plane — for any whatever reason,” writes user wobec commenting on the article in the Zeit Online.

#Su-24 downing by #Turkey: If it was #Russian, it was #Turkish aggression, because "was not out of #Syria".

​Many of the users also suggested that it was high time Europe reconsidered its relationship with Turkey.