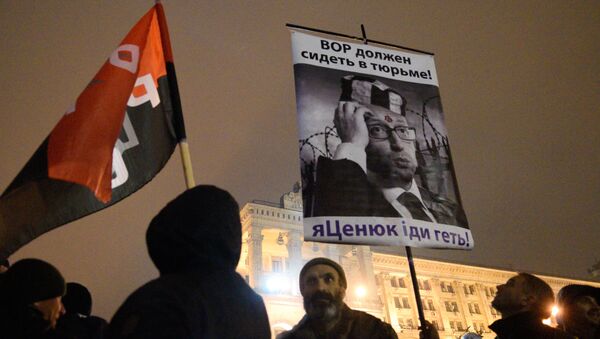 © Sputnik / Stringer
/
Go to the photo bank
Subscribe
The International Monetary Fund (IMF) has determined that Ukraine’s $3 billion debt to Russia is sovereign and not commercial, as maintained by Kiev. Financial analyst Andrei Kiprovich says that, in any case, Ukraine will be forced to pay it back: it is like "a rope around its neck," with gallows in every direction.

A Presidential Pardon: Putin Offers to Restructure Debt Owed by Ukraine
"Sovereign debt it is not just a debt owned by Ivan to John," he explained to Radio Sputnik. "It is a relationship between the states Ivan and John are living in. And, accordingly, the level of this debt does not depend on the willingness of a private individual to own up to it or not."

Kiprovich further described the international system of law which stipulates that debts shall be either paid back or restructured. While Ukraine has tried to downgrade the obligation to the level of private borrowing, it is, by default, a debt between the states.

Earlier this week Russia offered Ukraine a debt repayment restructuring plan envisaging three $1 billion yearly installments between 2016 and 2018, on the proviso that it is guaranteed by an international financial institution, the European Union or the United States.

All Ukraine’s suggestions, he added, are just "story-telling, with a rope around its neck."

The expert however said that he believes it is unlikely that any of the suggested institutions or countries would volunteer to act as guarantors of the Ukrainian debt.

Ukraine Risks Default if It Fails to Pay Debt to Russia - Kremlin
"They need Ukraine essentially for the purpose of putting spokes in Russia’s wheels," he figuratively explained, "or creating military conflict with Russia."

However he added that the only outcome will be that Kiev will be forced to pay its debt.

"Whether you bow to the Kremlin or reject the rules by declaring your independence, at the end of the day there can be only one result – the debt must be paid back. For them, there are gallows all around, wherever they choose to go."

Ukraine's $3 billion Eurobond debt to Russia was made in late 2013 by the previous government of Ukraine, under then-President Viktor Yanukovych. Ukraine's total government debt reached an all-time high in 2014, exceeding 70 percent of the country's GDP.

000000
Popular comments
well u had chance to be with russia and live normally.u prefered IMF and EU