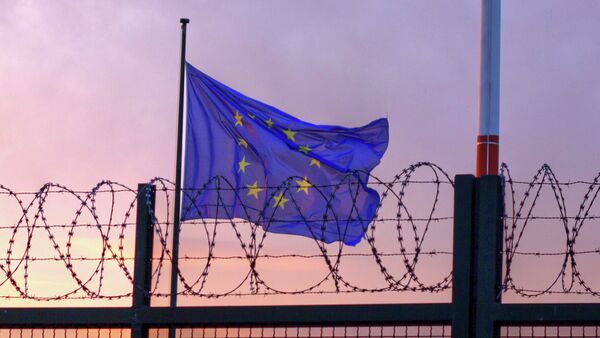 © Flickr / Oona Räisänen
Subscribe
Is the Paris massacre the beginning of the end for 'Europe without borders'? Startfor analysts believe that the tragedy will have a huge impact on the European Union's policies, especially the Schengen Agreement.

"The [Paris] attacks revealed the extent to which the situation in Syria, the immigration crisis in Europe and international terrorism are interconnected. The repercussions of the attacks will be similarly far-reaching," Stratfor's analysts predict.

Ticking Clock: European Civilization on the Brink of Extinction?
The intelligence company's report draws attention to the fact that France has already re-established border controls, as have Sweden, Germany and Slovenia. Recently, Hungary even erected a fence along its border with Serbia.

Although the temporary introduction of border controls fit the conditions of the Schengen Agreement, Stratfor analysts warn about the clouds gathering on the horizon of a 'unified' Europe.

"The big question is whether Schengen will be formally abolished, or if countries will begin to opt out from it," Stratfor writes, adding that the ongoing refugee crisis and the recent massacre in Paris have dealt a severe blow to the concept of a "Europe without borders."

Scary Prediction: ISIL in Seven Steps as Forecasted Back in 2005
Even though European governments are likely to bolster intelligence sharing and increase security collaboration, the fate of Schengen is now "in the hands of European voters," according to the intelligence company.

Undoubtedly, European right-wing parties will not miss the chance to strengthen nationalist sentiments across Europe in the wake of the Paris attacks. At the same time, the rise in Euroskepticism will also be felt in Europe.

"If the popular sentiment turns against Schengen, moderate governments — or, after the next electoral cycle, nationalist governments — could withdraw from the agreement," Stratfor warns.

Western Crack Down on Extremism Only Provokes More Hatred at Home
Needless to say, the attack on Paris could undermine the European Commission's plan for the relocation of thousands of asylum seekers across the European continent.

Stratfor's analysts point to the fact that German Chancellor Angela Merkel has already toughened asylum regulations in order to ensure security. Meanwhile, Poland and some other Central and Eastern European countries have rejected the EC's plan.

Despite its growing displeasure, "Brussels will be too weak to introduce sanctions against the countries that choose not to participate in the plan," Stratfor remarks.

Seemingly, the concept of Europe "without borders" is falling apart at the seams.

"The Paris attacks will accelerate some processes that were already underway in Europe, such as resistance to migration and criticism of the Schengen Agreement," Stratfor concludes.

000000
Popular comments
I have travel a lot in Europe for my profession (over 25 Years) and I have welcome Schengen. But now and for +/- 5 years ago doubt came to my mind ! Today I have to say Schengen is a complete mistake !! Schengen will destroy sovereign country's in Europe.
tobi.gelando
19 November 2015, 22:37 GMT1
000000
Paris attack a lesson , that what terrorises your neighbor must be taken serious after all it might come back to taunt you should your cease to exist