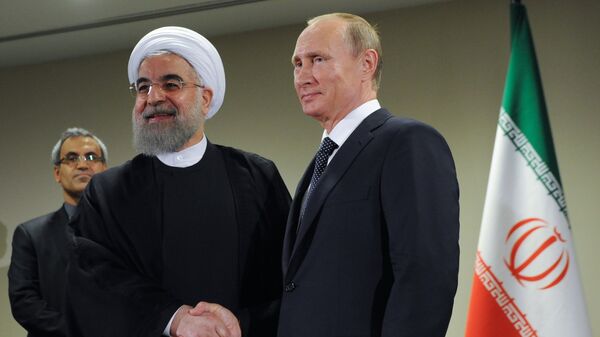 Washington is playing a hypocritical game with Russia and Iran over Syria sowing seeds for further destruction in the region, political analyst Salman Rafi Sheikh notes.

In his recent testimony US Defense Secretary Ashton Carter confirmed that the United State will continue to support "moderate" military groups both in Syria and Iraq, adding that Washington plans to step up ground forces in order to defeat Islamic State in the region.

"It is already a well-known fact by now that the US has never been fighting ISIS [ISIL] or any other Islamic militant organization in Syria. On the other hand, it has been supporting them by all means," Salman Rafi Sheikh, a political analyst and expert in international relations, underscored in his article for New Eastern Outlook.

"These fronts include: diplomatic, Islamic militancy and a proper military offensive, including both ground and air operations," Sheikh explained.

He drew attention to the fact that Washington is currently courting Iran, apparently making attempts to persuade the Islamic Republic to take its side. The US even invited Tehran to discuss a peace proposal in Vienna, he remarked.

The analyst believes that Washington wants to drive a wedge between Moscow and Tehran in order to at least weaken, or undermine, Russia's offensive against Islamists in Syria

"The underlying reason for this tactical inclusion of Iran is that the US aims to win Iran's heart and mind to ditch both Assad and Russia amidst their fight against ISIS [ISIL] and other CIA-backed terrorist organizations," he pointed out.

Pre-Election Folly? Sen. Graham Urges to Shoot Down Russian Planes in Syria
Sheikh emphasized that despite Washington's efforts it is highly unlikely that Iran would fall into the US' trap, given the depth of Iran-Russia relations.

Needless to say, the "Assad must go" slogan remains the cornerstone of Washington's political agenda regardless of the numerous speculations that the Obama administration has apparently softened its stance.

"The US hopes that Russia and Iran will, after expending considerable financial and political capital to radically change the realities on the ground in Syria, come around to Washington's view that Assad must go and a new government made up of the opposition must be installed," Sheikh stressed.

Washington is playing a hypocritical game with both Iran and Russia: under the smokescreen of the US-led anti-ISIL campaign US hawks are harboring plans to Balkanize Syria and overthrow its legitimate president.

"One has to content that the US government's mantra of "peaceful resolution" and "dialogue" is only a hypocritical cover to protect its proxy-terrorist groups and defeat Russia and Iran in their fight against them," Sheikh concluded.