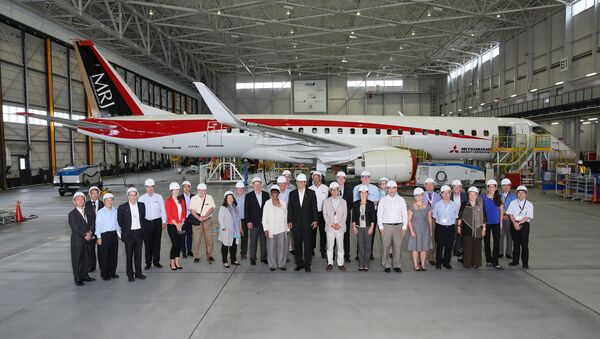 © Flickr / Jay Inslee
Subscribe
Japan's first commercial jet in half a century made its maiden flight on Wednesday, in a breakthrough for the country's long-held ambition to establish an aircraft industry that can compete with the world’s major aircraft builders.

The aircraft, which can seat as many as 92 people, offers more headroom than similar planes. At 2.03 meters, it narrowly edges out the 2 meters for the 88-seater Embraer E175 and the 1.89 meters for the 90-seater Bombardier CRJ900.  The plane’s maximum range is 3,700 kilometers.

The first MRJ is slated for delivery in June 2017 to Japan's biggest carrier, ANA Holdings. Mitsubishi aims eventually to sell more than 2,000 aircraft in the competitive market segment.

Japan's last attempt to establish itself as a commercial aircraft maker ended in failure.

Production of the YS-11, built by a consortium that included Mitsubishi Heavy, finished after only 182 planes were built.