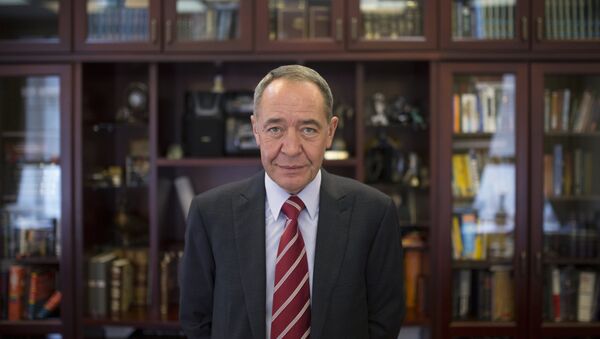 © Sputnik / Iliya Pitalev
/
Go to the mediabank
Subscribe
International
India
Africa
On Friday night, US officials confirmed to their Russian counterparts that Mikhail Lesin, the former press minister, and until recently, one of the most influential people in the Russian media space, had been found dead, aged 57, in a hotel suite in Washington, D.C. Sputnik takes a look back to remember the man and the age in which he lived.

D.C. Police confirmed they that they conducted an autopsy on Friday, and that the results, including a toxicology report, would be made available in several days. ABC News has confirmed that so far, no foul play is suspected.

President Vladimir Putin has expressed his condolences over the former press minister's passing. A Kremlin press service release emphasized that "the president appreciates the enormous contribution made by Mikhail Lesin to the formation of the contemporary Russian media."

In the West, Lesin is most widely known for his role in conceiving Russia Today (now RT), a state-run English-language television network which offers an alternative, non-Western view of global events by encouraging viewers to 'Question More'. Since its launch in 2005, RT has expanded across continents, broadcasting in multiple languages, and successfully presenting the Russian point of view on world events, something even its harshest critics have admitted. Lesin's role in RT's creation is arguably his greatest accomplishment.

World
Russian Embassy Says Former Russian Press Minister Lesin Died in Washington
Inside Russia, Lesin was known as one of the leading figures of contemporary Russia's media market, serving as press minister (between 1999-2004) and as the head of Gazprom Media Holding (October 2013-January 2015), a group which owns several major Russian television and radio stations, movie studios, as well as online and print publications.

Between 2004 and 2009, Lesin served as an advisor to the Russian president, charged with overseeing the development of media and information technology, including the creation of Russia Today. Lesin's resignation in 2009 was unexpected, and widely rumored to have been the result of a perceived conflict of interest between his activities in business and his work as a civil servant.

Lesin first came to prominence in the media industry in the early 1990s. He created the advertising agency 'Video International', which would go on to become a multi-billion dollar firm, and the largest player in the Russian advertising field by the end of the 1990s, a position it has maintained to this day. Coming onto the scene of the Russian media market during Russia's difficult post-Soviet transition, Lesin and his partners effectively had to figure out from scratch how the advertising field, which never existed in the Soviet Union, actually worked.

Before becoming press minister in 1999, Lesin briefly headed the Kremlin's public relations office (1996-1997), and serve as vice-president of the All-Russia State Television and Radio Broadcasting Company (1997-1999) as it transformed into a major media holding. He was believed to have been given the position for his loyalty to president Yeltsin during the 1996 re-election campaign, during which he created the iconic 'Vote with your heart' and 'I believe, I love, I hope' campaign advertising commercials.

During his tenure as press minister, Lesin would participate in one of the loudest media scandals of the early 2000s –the transfer of oligarch Vladimir Gusinsky's media holding company Media Most's assets to state energy giant Gazprom.

To be sure, Lesin was not without his sins, and was involved in the dirty media games of late 90s Russia. As RIA Novosti recalled, the media guru was rumored to have played a key role in the creation of a secret tape compromising former Prosecutor General Yuri Skuratov. Hidden camera video of the prosecutor general, who was known as a bitter adversary of Yeltsin, and who was conducting an aggressive investigation into several large cases of government corruption, was broadcast on federal television, featuring Skuratov rolling around in bed with two young women, who turned out to be prostitutes. Ultimately, the scandal resulted in the prosecutor general's resignation.

Russia
Former Russian Press Minister Mikhail Lesin Dies Aged 57
Following his tenure at Gazprom Media Holding, in January 2015 Lesin resigned from his post, ostensibly for family reasons, with rumors suggesting that he had difficulties in his relations with the heads of federal channels and with Alexei Miller, the chairman of the board of directors of Gazprom Media.

RIA Novosti, the news agency Lesin worked for in the early 1990s, remembered him as "a talented manager and a powerful official, who would suddenly disappear from the media space, and just as suddenly return, giving impetus to the development of the industry with new ideas." Following news of his death Friday night, it appears that Lesin has once again disappeared from the media scene, this time for good.