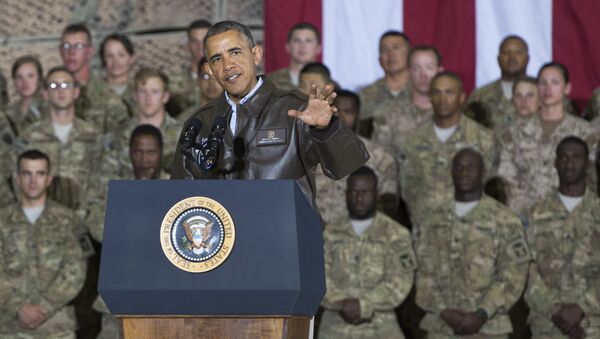 Americans must speak out now before it's too late, Ron Paul warns, pointing to the fact that US neocons obsessed about their regime change idea have no scruples about risking the lives of US soldiers and even a major war in the region.

Although Defense Secretary Ashton Carter admitted the complete failure of the US "train and equip" program for rebels in Syria, he is not going to give up, former US congressman Ron Paul remarks.

"Instead of taking the appropriate lessons from that failure and getting out of the 'regime change' business, he announced the opposite. The US would not only escalate its 'train and equip' program by removing the requirement that fighters be vetted for extremist ideology, but according to the Secretary the US military would for the first time become directly and overtly involved in combat in Syria and Iraq," Dr. Paul emphasized in his article for the Institute of Peace and Prosperity.

American Ground Troops in Syria: ‘World Won’t Stand Another US Invasion’
To complicate matters further, Secretary Carter proclaimed that the US would begin to fight Islamic State directly "whether by strikes from the air or direct action on the ground."

President Obama ruled out such a possibility when he launched an anti-ISIL military campaign in Iraq and Syria last year, but it is likely the White House will break the promise now.

"Did anyone think he would keep his word?" Dr. Paul asked rhetorically.

Thus far, judicially speaking, neither of these claims makes any sense today, not to mention the fact that Obama's year-long bombing campaign in Syria is a violation of the country's sovereignty and is illegal according to international law, Ron Paul pointed out.

Needless to say, Congress is not even consulted while the US President is preparing for another overseas military campaign.

"I cannot condemn in strong enough terms this ill-advised US military escalation in the Middle East. Whoever concluded that it is a good idea to send US troops into an area already being bombed by Russian military forces should really be relieved of duty," Ron Paul underscored.

Dr. Paul called attention to the fact that US interventionism has already resulted in the damage and devastation in Iraq, Syria and Libya. Now US neocons are determined to risk the lives of US troops and even risk a major war in the region, he warned.

"This is not our war. It is time for the American people to rise up and demand that the Obama Administration bring our military home from this increasingly dangerous no-win confrontation. We must speak out now, before it is too late!" Dr. Paul concluded.