Breakthrough: Russia, US Sign Memorandum on Military Flights Over Syria 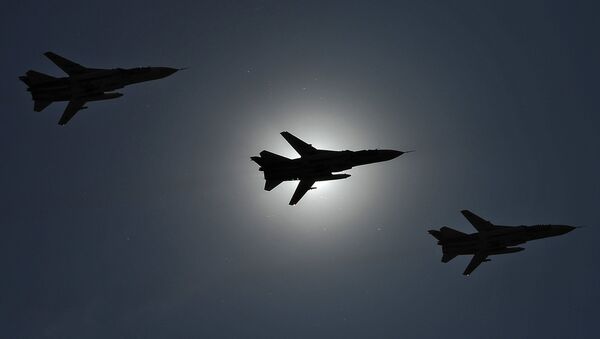 Russia has received an agreed memorandum from the United States on the prevention of air incidents over Syria, the Russian Defense Ministry said Tuesday.

"This morning we received a memorandum agreed by our US colleagues on the prevention of air incidents in the Syrian Arab Republic," Maj. Gen. Igor Konashenkov told reporters.

Russian, US Militaries Improve Undestanding on Syrian Flight Safety
Moscow hopes that the memorandum will concern all countries taking part in the US-led coalition's air campaign against ISIL. The US vowed to share the safety rules with all parties operating in Syria, Konashenkov added.

"We believe that the signing of such a document is an important step that has practical importance."

The Russian Defense Ministry said Tuesday that the memorandum regulates flights of all aircraft over Syria, including drones.

The agreement between the US and Russia on the flights over Syria shows high potential for cooperation between the two countries, including in the fight against terrorism, Russian Deputy Defense Minister Anatoly Antonov said Tuesday.

According to him, "the document is of great practical importance" since it regulates the activities of manned and unmanned aircraft in the Syrian airspace.

#Antonov: This document is of considerable practical importance: it regulates operations of different aircraft in the airspace over #SYRIA

"The memorandum contains a set of rules and regulations that aim to prevent incidents between Russian and US aviation."

US-Led Coalition Carries Out 1 Strike in Syria, Hits 3 ISIL Vehicles
Antonov noted that Washington vowed to convene these rules to all members of the US-led coalition against the Islamic State, adding that the coalition's pilots will act in accordance with the agreement. As soon as the deal comes into force, round-the-clock communication channels will be established between Russian and US military authorities, he said.

However, the signing of the memorandum does not change Russia's "principled stance" concerning the fact that the Russian Aerospace Force acts in Syria in accordance with the international law and at the request of the country's legitimate authority, while the US-led coalition does not, Antonov said.

"The United States and the anti-ISIL coalition led by the country use force on the territory of Syria without a request from its government and without a UN Security Council decision."

According to the Russian defense ministry's spokesman, the presence of different aircraft in Syria has increased recently. There are sometimes over 30 aircraft in one area at the same time that poses threat to the safety of flights over Syria. "These are military transport aircraft, combat aircraft, unmanned vehicles of various sizes, including unmanned fighting aerial vehicles."

He noted that the Russian air group coordinates its activities with the Syrian air traffic control service concerning every flight of Russian aircraft. "The rest of manned and unmanned military aircraft are flying in the Syrian airspace without approval and without transponders turned on."

It is also necessary to establish cooperation with Pentagon on rescuing pilots in Syria, the Russian defense ministry's spokesman said.

#SYRIA Signing of this document is an important step,but it's necessary to go further to organize search-and-rescue for any country's pilots

Russia Ready to Team Up With Turkey Against Terrorism
"First of all, this concerns the establishment of operational cooperation in regard to rescuing pilots from any country in case of any force majeure over Syria. Unfortunately, our American colleagues have yet to show understanding of the seriousness of this issue."

Russia has repeatedly expressed readiness to cooperate on the flights safety issues with all countries interested in the elimination of international terrorism in Syria, he emphasized.

"Let me remind you that Russian and Turkish military departments organized a hotline aimed to prevent unintentional air incidents in the skies over Syria." Moreover, such a coordination exists between Israeli and Russian Air Forces' command centers.